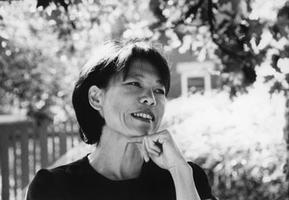 A third-generation Chinese-Canadian, Denise Chong, the internationally published and award-winning writer, was born in Vancouver and raised in Prince George. She studied economics at the University of British Columbia earning her bachelor’s degree in 1975. She received an MA in Economics and Public Policy from the University of Toronto in 1978. Denise began her working life in the federal finance department and went on to become senior economic advisor in the office of Prime Minister Pierre Trudeau. After Trudeau’s retirement in 1984, Chong left her role as a public servant in order to pursue a career as a professional writer. Chong is the author of the following non-fiction books of literary non-fiction: The Concubine’s Children, The Girl in the Picture, Egg on Mao and Lives of the Family. Denise Chong was the 2017-2018 Canadian Writer-in-Residence for the University of Calgary’s Distinguished Writers Program. She lives in Ottawa with her family.

Jamal Ali: Can you reflect on your career as an economist with the Federal Government in Ottawa? What was it like?

Denise Chong: My siblings and I were the first generation of our family to go to university. My goal of academic training was to land me a job, not only to apply and test what I had learned, and to learn more, but I had student loans to pay back. I graduated in the 1970s. As a product of the Trudeaumania that swept the country in the 1960s, I headed for Ottawa, wanting to be part of a progressive vision for a more enlightened society. For sure, working in government was a satisfying start to my working career, more particularly when I moved on from the Finance department to join the office of Prime Minister Pierre Trudeau. From Pierre Trudeau, I learned the importance of intellectual rigor, which has sustained me in my writing career.

JA: What inspired you to pursue professional writing?

DC: While I had always wanted to write, I recognize the luck involved in one’s career. Many write, and will write well on important and timely subjects. I was lucky in my time; I first wrote The Concubine’s Children as a feature-length article in a magazine. That was my first such article; publishers came to me with proposals to have me turn that into a book.

JA: You are best known for The Concubine’s Children, a memoir of your three generations of family set between Canada and China. How did the idea for this book come about? Can you share your personal experience in the writing process of the book? The Concubine’s Children has won several awards including: The “City of Vancouver Book Award” in 1994, The “Edna Staebler Award for Creative Non-Fiction,” and The “VanCity Book Prize.” Knowing that this is your first book, what was your reaction about this work of Creative Non-Fiction winning several awards? How did you feel?

DC: The book began with a nagging curiosity since early childhood of trying to make sense of my origins. My family had a mere handful of black and white photographs from my mother’s side of the family, which was all that we had of her past; anything of value had long gone the way of the pawnshop with the death of the last surviving grandparent. Among those photographs was one of two sisters, marooned in China and whom my mother had never met, and we didn’t even know if they were dead or alive. It was on a trip to China, with my mother, then almost sixty years old, when we found one of those sisters alive that I decided only an act of writing could retrieve the past and restore the two halves of the family.

For certain, that first book’s success helped launch me as a published author and led to my next book, in terms of my writing life, the thinking and reflection that I brought to that first book affirmed a sense of family as providing a scaffolding for storytelling; it can wrap in its embrace the tumult of history and politics, it crosses generations and even continents.

JA: Your second book, The Girl in the Picture, is described by Amazon.ca: “A rare look at the Vietnam War from the Vietnamese point-of-view and one of the only books to describe everyday life in the wake of this war and to probe its lingering effects on all its participants.” What are your thoughts on this description?

DC: I believe that stories that pivot on an individual’s story also afford an opportunity to tell a social history. In The Girl in the Picture besides telling the story of Kim Phuc as a casualty of the war, I was determined to portray life in a war-torn society and thus, explore how war may end, but its effects linger. I was even more determined as I did my research, and found almost nothing written or reported from westerners on life in Vietnam after the end of the war. That was why I wrote in the book that to the west, Vietnam was a war, not a country.

JA: According to Wikipedia, your third book, “Egg on Mao was written with the intention of helping Westerners to better understand the issue of democracy and human rights in China.” Any comments?

DC: I was particularly interested in Egg on Mao portraying human rights in terms of everyday life, of giving it meaning in how one goes about one’s daily life, one’s relationships, and one’s concept of a future. My intention was to explain it in concepts of the human condition—in other words, without resorting to the term “human rights”—and the instinct and right to love and to live with decency and fairness. And, in my telling of the “three friends” participation in the 1989 democracy demonstrations in Tiananmen Square, I wanted to explore the yearning for freedom, and comment on the nobility of protest, even in the face of a knowledge of futility, and on whether repression and years of prison can douse that yearning.

DC: As much as the stories in Lives of the Family portray immigrants, my literary idea was twofold. I wanted to explore the arc of the immigrant experience—including leaving and arriving, feelings of exile and isolation, and of looking to the future and looking in the rearview mirror at the same time. I also wanted to illustrate how both the momentous and the small, from war to revolution to say, a sister’s refusal to go abroad such that her parents send a substitute younger sister can equally dramatically change the course of one’s life.

JA: What do you think of The Calgary Distinguished Writers Program?

DC: The program is an enormous boon to the writer, affording both the time and financial stability to write, and as well, the opportunity to live in Calgary and to immerse oneself in the community here of both its writers and its readers. I’m grateful, more than words can express.

Jamal Ali lives and writes in Calgary. Originally from the Caribbean island of Trinidad and Tobago, Jamal immigrated to Canada together with his parents and siblings in 1967.