Review of Jennifer Spruit’s “A Handbook for Beautiful People.” 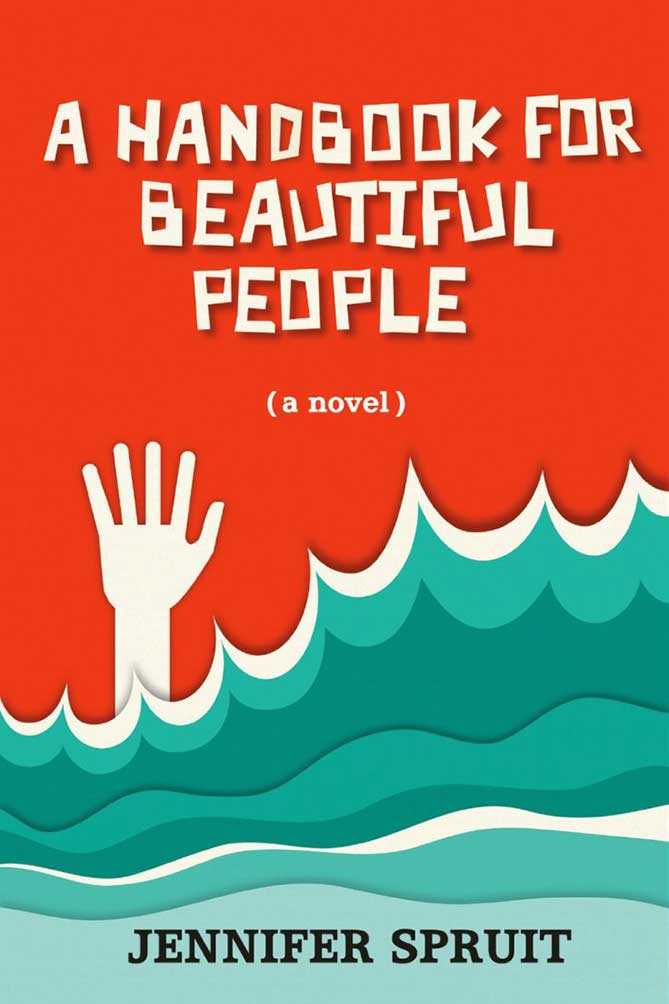 A Handbook for Beautiful People by former Calgarian Jennifer Spruit is a gentle love letter to the imperfect and broken set against the backdrop of the 2013 floods. A compelling and complicated story of making impossible choices and finding grace, Spruit’s characters are at times quirky and original, at times desperate and violent, but always filled with fierce love for one another.

Marla, a young woman with Fetal Alcohol Spectrum Disorder, is a free-spirited, often flighty soul, with a strong voice and a murky past that she battles to keep hidden from her emotionally-distant boyfriend, Liam. A hallmark of Marla’s FASD is her struggle to stay focused on following through on attaining even the smallest goal. Marla is late for work, forgets to return from breaks, and is easily diverted from her duties. But she knows for sure that she loves Liam, and that she is good for him, even if he sometimes seems embarrassed and overwhelmed by her.

Liam is a straight-laced music teacher who desperately wishes for a career as a musician, but his future as a professional cellist is hampered by an increasing ache in his hands. He loves Marla, but her over-the-top-ness and fun-seeking is sometimes more than he can take.

Liam also despises Dani, Marla’s housemate and best friend since the “old days” when the two women clung to each other, turning to prostitution to survive. Now, Dani is weighed down by an addiction she supports by selling sexual favours from her basement suite. Dani hates Liam, too, with his judgmental looks and expectations, and would like nothing more for him to disappear from Marla’s life.

Marla is managing both relationships as best she can when two things happen: one, she gets pregnant, and two, her deaf brother, Gavin, returns from out east after years away. Gavin communicates through a combination of lip-reading, signing, and writing in a notebook – which means he often misses the context and intent of a conversation. He is a keen observer, a preacher of clean living and honesty. He writes his most secret thoughts in his journal, the cover of which bears the inspiration for the title of the novel.

Spruit has chosen to make Marla and Gavin narrators, each alternating a section to tell the story as only they can – Marla, who hangs her emotions and needs out for everyone to see, and Gavin, who is introverted and silent, keeps everything locked up, closed inside his Handbook.

Now pregnant, Marla’s well-intentioned good-heartedness is still derailed by her inability to hold onto her thoughts long enough to follow through on what needs to be done, and what needs to be done is “what’s best.” Best for her baby, but also best for her. Marla holds an image in her mind of what being a good mother means. She and Liam will be the loving, safe family that she herself never had. They will provide a home, and sanctuary.

Then Marla and Liam break up and Marla is set adrift. Gavin and Dani collide in a violent confrontation that changes everything.

Set against the backdrop of the oncoming Calgary flood, each character begins to flounder under the expectations and limitations they face. Lies are told and compounded, people are hurt, and boundaries erode until the ties that connect all these disparate, desperate lives together snap under. Rising flood waters amplify the increasingly difficult and complicated choices Marla must make for her baby. Liam has left her, her brother is having a breakdown, and her drug-addicted best friend is jealous and acting out. Marla struggles to simplify choices and relationships, to distill them down to what’s best.

When the flood comes, each character is pushed to his or her limits – the baby arrives, along with the most heartbreaking choice a new mother can make. Should she keep the baby? Marla must rely on her optimism and faith to make the best decision she can for her child.

A Handbook for Beautiful people is sad, yet filled with grace and forgiveness. The characters are funny, kind and, at times all too human and enchantingly infuriating. They are always looking to be better, to try harder and to reach higher in spite of the difficult circumstances they face.

In A Handbook for Beautiful People, Jennifer Spruit has written a vibrant, original story that, in the end, leaves the reader more aware of and more empathetic to those who struggle to live and thrive on the margins of society.

Kim McCullough is a writer and teacher from Calgary, AB. She is the author of the novel Clearwater. Her writing has appeared in various literary journals including The New Quarterly, Room, FreeFall Magazine, and Grain. Kim is currently working on a collection of essays about education.