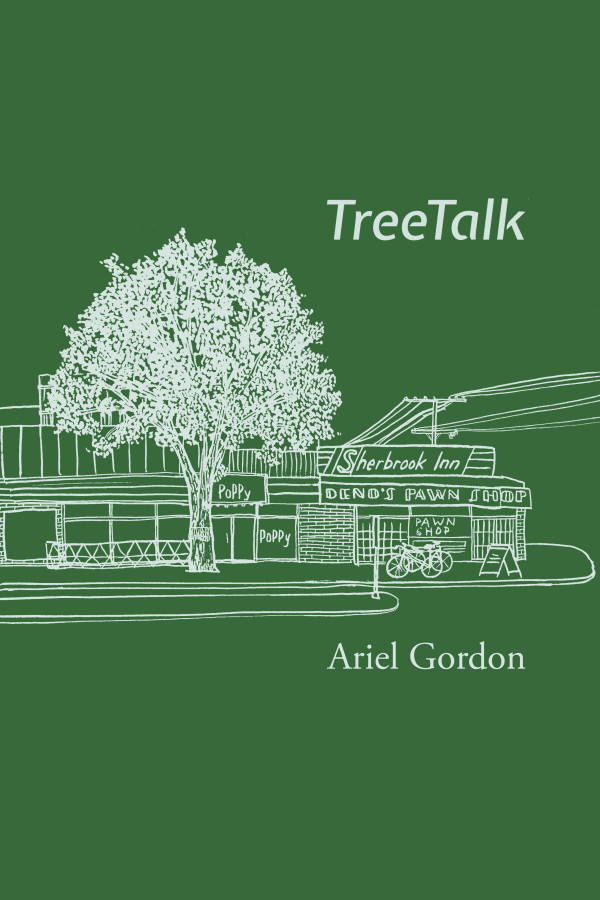 First of all, TreeTalk is an innovative poetry collection. While most entries are from Gordon, many others come from quotes or members of the community, as poems were attached to and later collected from an elm tree in Winnipeg. In creating this collection of poems, Gordon slowly transitions from being a writer to being a curator and finally an arborist. TreeTalk seems fairly random in its assortment of poems in the beginning, but as the collection grows and branches out, patterns emerge. The poems work in tandem, creating a discourse about community and the
relationships between nature and humans.

Gordon uses short forms packed with imagery and depth to produce these patterns, growing the book one leaf at a time in a way that keeps the reader interested the whole time. The connection between plants and humans is in lines such as “I am shrinking like a violet” and in poems which do a taxological breakdown of Winnipeg and elm trees. In some cases, Gordon explicitly compares herself to plant life. In cases such as the taxonomy lessons, one must consider the two poems in relation to make the most of the collection.

This comparison of poems is often a necessity, as some are not strong on their own. For example, a sense of community emerges from the quotes used throughout the collection, as one states “‘Why do you fight to save the elms… they are all going to die anyways’” while others claim “‘we may never see trees of this size in Winnipeg again” combined with a quote praising “‘Little towns that worship big elms.’” It is this clash of perspectives, the inclusion of poems from passersby, and the attention paid to Winnipeg specifically that make the elm and this collection a kind of living artifact for the city, intertwining the two forever. However, these poems by themselves are nothing to write
home about.

In addition to a sense of kinship between the city and the elm, Gordon also adds a sense of dread about how capitalism views the tree. This sentiment emerges in lines such as “I’m sorry for what we are doing to you. I want us to be better” and poems which outline “the utility of trees” which discuss how humans consume wood for “barrels, boxes, crates, furniture…” In these poems,
Gordon makes the most of her economic forms, transforming the simple elm into a martyr for the city of Winnipeg.

Lastly, I must discuss the use of form and space. There are often pages with as few as three or four lines which is kind of an ironic waste of paper given the critique of consumption. One whole entry for example is “I am shrouded, cooled. / I am canopied, in good / company. I am treed.” It is poems like this, standing alone in the middle of a page, which leave me wanting more. The
empty space could turn into the tree itself if Gordon had used more concrete or emblem poems. Even these three-lined poems, presumably the haiku mentioned in the book’s intro, were a letdown to a reader of Japanese literature. They often lack a kireji–the cutting word on which haiku depend so essentially–and are too heavily influenced by the “I”.

At the end of the day, however, this critique of form is my only gripe with the collection. Gordon presents the themes in the book with an interesting variation in media, and the idea of creating a collection of poetry with the community is an innovative idea that Gordon masters. The collection is an artifact of the community, and provides well-written commentary on the relation between humans and inner-city trees. It is a collection I would recommend to anyone who is a fan of short forms, an arborist, or a Winnipeg resident.