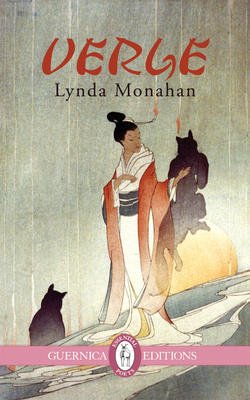 In Verge, Monahan writes slender verses that carry a MacEwenesque self-discovery and wisdom. Just as MacEwen associated with ‘magic animals’ and talismans as an extension of her Jungian-conceived consciousness, so Monahan identifies with the fox figure in a series of “verges” or prayers that run through the collection. The term “verge” indicates some brink of discovery through pain—as on the verge of tears—or experience, which Monahan often conceives as a physical landscape. Interspersed with these verges, Monahan writes about family members in terse verses where small details evoke whole lives.
Although these intermittent prayers dubbed “verges” supply the title for the poetry collection as a whole, the word “verge” appears in “verge 8,” which I will call the ‘title verge’ for this reason. Here the poetic phrasing once again recalls MacEwen’s finely chiselled, sparse verses:

“Dark Pines under Water” with its Jungian depths of consciousness comes to mind. Rather than using the landscape as analogue and psychological metaphor, Monahan reflects her delight in the nimble and alert creature of the fox itself: “I dream of the small hello / of your ears / pricked and listening” (102).
In spite of a mystical tendency in which the speaker identifies with the fox figure throughout these ‘verges,’ Monahan can be down to earth. In the poem “my mother’s name was Nancy,” the speaker describes her mother as a young woman who “pinched her cheeks / to give them colour” and “met a young French man / who broke her heart” (16).

Later she married dad in a long satin gown
fifty tiny buttons down her back.

Monahan’s interest (tinged with amusement?) in the number of buttons at the back of her mother’s dress adds a no-nonsense human quality to the poem that contrasts with the more elusive voice in the verges. In that parallel thematic series, the poet is seen to follow her poetic-of-the-artist-as-vessel for inspiration, as expressed in the poem “not I”:

it’s the fire woman
who turns and turns
in the shiver of silver flames
words sparking from her mouth.

Here the “fire woman’ who “turns and turns” at once evokes MacEwen’s dance and echoes Yeats’ similar application of the image.
Not only does Monahan have a minute and particular musical sense that is heard inside and at the edges of her verses, but also a humanity that is warm without sentimentality. The ending in the poem about the speaker’s mother “my mother’s name was Nancy” ends with the portrait of a woman of strong character who does not give up, causing her husband displeasure while she repairs the eaves when dying of cancer:

The poem’s ending, with the doctor’s reported words, is moving: “Nancy it’s time we took you to the hospital now…” To which her mother “after hesitation” replies “yes.”
Similarly, the poem dedicated to the speaker’s father, “dad’s angel” shares this hard-headed quality. Monahan begins the poem matter-of-factly: “No Billy Graham angel / all glory and grace,” her father is not without flaws. In fact, he keeps playboy magazines under the bed, drinks beer with his buddies, and “loved the heft of a good gun.” Monahan builds up to the poem’s ending with a storyteller’s grace and gentle irony, stating that her father’s angel didn’t hold her father in his arms or smile a “beatific smile”:

Contrasting with the more cultured elements in the verges with their nature imagery and the fox image, there is this no-nonsense human quality to the family poems that have a folksy quality.
Monahan, who is writer-in-residence for the wards Victoria Hospital in Prince Albert and facilitates the Writing For Your Life group with the Canadian Mental Health Association is a strong advocate for individuals with psychological afflictions. That her experience may be firsthand is suggested in the poem “there was a time.” The speaker recounts, “I was a thin walking stick of pain,” and likens her experience to that of an “insect” “wearing my exoskeleton / living on lettuce leaves.” That she skips two or three days eating and “the lighter I became / the less weighted I felt” tells us the speaker is afflicted with a form of anorexia:

The appeal of this new state of being as a “will-o-the-wisp-woman” or “a magic wand” becomes clear as the speaker expresses the desire to “tap three times” and make herself disappear. There is a mystical suggestion in this poem that, while about family, seems to have more in common with the more introspective verges.
Perhaps the most moving poem about family comes in the long poem about the speaker’s sister who suffers a stroke (“the word for every thing”). In an amusing dramatic tableau, the speaker teaches her sister words that she has lost, and in her sister’s fumbling calls her “the poet.”

The mistaken words do indeed have the freshness of malapropism that make the speaker see the world anew, but her sister’s response is that she is still the poet: “no she says and hugs me you” (95).
In the final poem “verge 10,” the fox reappears as a figure of redemption that in identification with the woman “waits in the forest’s calm palm”: “I want to be / like you   unhurried and graceful / accepting of what comes next” (118).
Here is an elegant collection held together lyrically with the fox running through the forest, and the speaker divided between her introverted and extroverted selves as she celebrates life in its beauty amid family losses while also striving to come to terms with herself.