Book Review of “The Long White Sickness” by Cecelia Frey 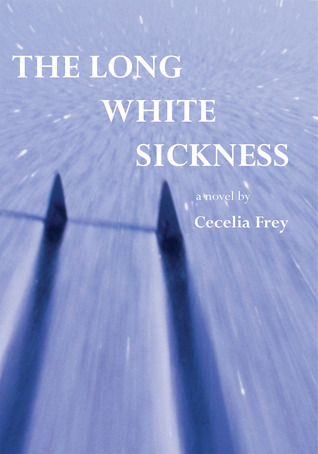 I attended the launch of this novel in July of this year. I observed the popular local author Cecelia Frey, a diminutive woman, pretty in a pink and floral dress as she worked the room with grace and ease, generous with her time as she greeted each friend or family member, eventually relinquishing this role to step up to the large crowd to introduce us to The Long White Sickness, her fifth novel. Frey has also written three collections of short stories, five books of poetry, and one play. She began reading from sections of the Prologue:

This is my official autobiography, a scorching tale of desire and betrayal. A deeper reading, however, suggests that it is more exactly a story about being in love, a fool’s story of too much heart and not enough head (3).
I have spent considerable time contemplating where to begin . . . . After much thought and measured deliberation, since, as I have said, things became more interesting at the end, I have decided to start with my suicide (9).

And, with this, she thanked everyone for coming to the reading, and stepped away, preparing to autograph copies of her latest novel.
This was a stunning, dramatic reading, and I have no doubt that most people in attendance plunged into the pages of this book at their earliest opportunity.

Frey’s posts on Facebook (May, 2013), “My wisdom for this year: Life, like a novel, is the development of all the inferences contained in the beginning.” And to further, “This [novel’s] about one woman’s lifetime pursuit of an uncooperative and perfidious muse, a black comedy.”

I believe Aristotle said that plot is character. The physical actions of Frey’s characters move the story, even, and perhaps especially, when the story yields itself to magic realism with comedic spin. Black humour, oh yes, it is “laugh out loud” funny. And it is also serious, sentimental, and always told in the author’s authentic voice.
Only a gifted writer like Cecelia Frey can persuade her readers that the voice of her narrator is a person of righteousness, intelligence, and goodwill; her tone garners the readers’ respect and persuades them to provide witness to the events. That same voice skilfully acts as a chameleon when it exploits the prose and/or poetry of other characters in the book; for example, daughter Lara’s partner Rowlf’s hip hop renderings; or Sergeant Rock’s detective manuscript.

Frey takes the reader on a carefully calculated suicide mission up a snowy mountain on the 1st of January with the intention of reaching the summit of the mountain, then “shoving off” (19). As her “Constance” scales the mountain, her stream of consciousness deliberates many of her memories and regrets from the past, thus allowing the reader glimpses of the people in her past and her wounded connections to them. Perhaps Gully, her first husband, was correct when he said, “The trouble with you, you live backward instead of forward” (4). And he would also be wrong, because a lone skier on a snowy mountain must have her wits about her, and she does, as is evidenced by her observation of the whiteness around her. “White is death in our cold climate. White can invade brain cells, occupy spaces of the mind. It can muffle you so that you scream and scream but can’t be heard. I hate white” (15). Frey’s exploration of white as metaphor on this page and in this first chapter culminates in a veritable homage to the word when Constance makes it around the bend, to the place of her departure.

And then I was around the bend. And then I was struck with awe. The earth was a living moving thing, taking on new shapes by the instant. A fantastic ballet of various forms of white – the snow swirled into heaps, heaps that then took off with a life of their own, creating an evolving landscape that was both distorted and magical. I had forgotten that aspect of white. I had forgotten that it could be magic (18).

Readers will discover their own interpretations of “white”, but the word and its implications cannot be ignored, as it appears in every chapter of the novel. Nor can the overall theme of the novel be ignored: perception is reality from someone else’s point of view. Cecelia Frey generously provides her characters with every necessary accoutrement to bring the novel to successful completion.