Book Review of “The Crimes of Hector Tomás” by Ian Colford 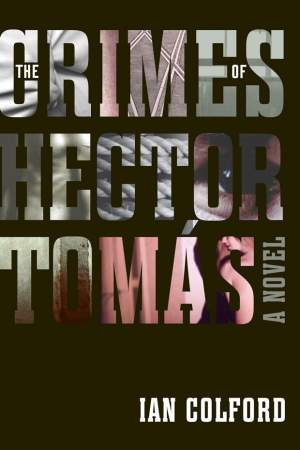 Lori Willocks
a review of

Halifax-based author Ian Colford explores the dark side of human nature in his novel, The Crimes of Hector Tomás. He brings the reader into the minds of the most malevolent in society: the torturer, the pedophile, the killer-for-hire and describes how people can be transformed into instruments of evil.

The Tomás family lives in an unnamed South American country that is being smothered under the strong fist of military rule. It is the 1970’s and 80’s, a time when much of Latin America was ruled by brutal military dictatorships that repressed and ‘disappeared’ many of the citizens in the name of fighting Communism.
Enrique, the patriarch of the large Tomás family, lives a secret life that is discovered by his son Hector and Hector’s beloved childhood friend Nadia. The anger Hector feels about what he finds out about his father spurs him to commit a violent crime. To help him avoid prosecution, his parents exile him to the countryside to live with his elderly aunt and uncle. The letters that flow between Hector, Nadia and his parents (that never reach their intended recipient) describe an increasing desperate political situation in the country. Hector then becomes a victim of the repression himself when he is dragged into custody by the military, who mistakenly suspect him of committing an act of terror.

The narrative then moves from a chronicle of a splintering family to a chronicle of violence unleashed. Unflinching in his grisly depictions of torture, assassinations and retribution, Colford delves into the thoughts and motivations of both the brutalized and the brutes. The country has become a place, “…which could not control its passions, which had not learned from its turbulent and inglorious past, and which time and time again allowed the most vulgar and malignant of its citizens to seize the reins of power” (114).

The novel’s main characters, like their country, are unable to control their passions. Enrique for example, is described as someone who, “… beneath the paternal instincts lurked something less admirable, something monstrous and grubby that he hardly dared acknowledge” (207).

The character Nadia transforms from an innocent child to an alluring mole for the rebels after her entire Polish immigrant family is ‘disappeared’. As the country descends into chaos, it becomes a question of who will survive the unspeakable acts of violence and by what means? The characters, like so many who endure life under cruel regimes, are forced into making desperate choices. Do you join the army and kill others in order to survive? Do you go underground to join the resistance? Do you live a quiet, cloistered existence and pray that no one takes notice of you? The choices that Hector, Nadia and Enrique make will decide their fate.

A recurring theme is how death can come so unexpectedly, how, “a world filled with such banalities could unleash its horrors in totally unexpected ways” ( 217). And how “… Death assumes its disguise casually – like a girl slipping on a summer dress – and lurks in even the most benign settings” (307).

The novel touches on other deep rooted historical Latin American struggles: the plight of its impoverished indigenous people and the persistent American interference in its political affairs.

The Crimes of Hector Tomás is a harrowing read for the graphic scenes of violence, but the vivid yet sparse use of language and strong characters make it worth the effort. There are many other minor, yet fully formed characters that keep the reader engaged throughout. The suspense lies in waiting to see whose survival mechanisms will prevail in a place where justice is meted out via retribution and bloodshed.

Ian Colford’s eight years of labour to write his epic, 400-page debut novel have paid off: the book has received critical acclaim and was the winner of the 2013 Alberta Trade Fiction Book of the Year Award. Hopefully we won’t have to wait another eight years to read more works of fiction from this fine writer.