Review of Jillian Christmas’ “The Gospel of Breaking” 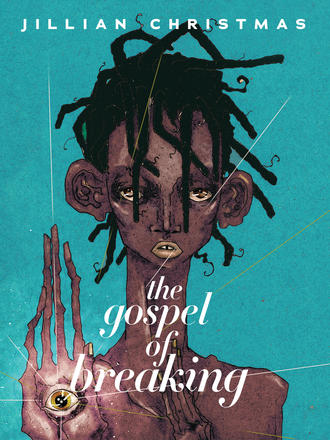 The poems of Ontario- born, Vancouver-based Jillian Christmas’ The Gospel of Breaking range in length, with a few as short as only three lines and others spanning several parts across several pages. Meanwhile, the styles within these poems range from rhythm-focused stream-of- consciousness to prose poems. One titled “the bike poem” is clearly meant to be read aloud when she addresses the “motherfucker who would steal my bike” before calling them a “douche-canoe,” which makes sense given her history as a spoken word poet. And there’s a few experiments with spaces and repetition to boot. All of this might make The Gospel of Breaking seem cobbled together. Might.

There are, however, common themes unifying these poems. For example, memories of her mother and cooking are often presented together. On “(from the ground, up),” Christmas compares herself to bananas, cherries and other fruits and vegetables “growing in mommy’s rainforest garden” (using adjectives more readily applied to fruit as she does), and then later on in the collection, she considers herself “a tender fruit,” “ready to burst and bleed at the lightest touch.” Ultimately, both of these poems end on a similar note because of how Christmas brings herself into the poem that is initially about food.

There’s a less overt theme of loss: “pink yukon sunsets / stretch so late that skies miss night / I like you like that” goes one poem in its entirety. Elsewhere, the poem that gives the collection its memorable title begins: “dear god / is it wrong that so long after / our separation / I still see your face / everywhere.”

Another, titled “I miss you much” showcases Christmas’ capacity for similes and imagery: “I miss you / like dark / and icy waters miss the / warmth of sun’s sweet / kisses.” By poem’s end, she screams in all-caps for the first time in the poem (for the most part, she has a thing against capitalization), “MY GOD,” before the finishing blow: “I miss you much.”

While some of these would benefit from hearing them being recited, most are clearly meant to be read. For example, when she plays with space and repetition on “poet searching meaning,” something would be missed if you were not physically able to see “the other” disappear from the text:

Christmas also tackles politics head-on. For example, on a poem titled “black feminist” written “In response to patti smith’s ‘rock ’n’ roll nigger,’” she sarcastically seethes “they said / I could be a feminist / that is / of course / as long as I don’t ask any questions / try not to mention the dirty mouths of old icons […] words made for the megaphone-mouth of punk rock stars / words like nigger.” Patti Smith, is, of course, the woman who brought poetry into punk rock or perhaps it was the other way around, and she tried to redefine that word as ‘artist-mutant’ in the 70s. Is it punk to rile people up? Absolutely, comes with the territory. Is it punk to shut another punk down? Gods, yes.

Not just racial politics either. She offers an alternative title to a different poem: “it’s only a good ride if you can choose to get off / or: to the people who would call robin williams a coward,” where she doesn’t pull punches: “to call someone a coward for surviving years of this torment is selfish / to do it with a mouth full of their laughter is simply ungrateful.” Not “years of torment,” you notice, but years of this torment.

Christmas brings up another 70s’ female icon later on: Joni Mitchell, one of the most honest songwriters in music. “Would you take me as I am / Strung out on another man?” Christmas’ poems are honest too: they’re often explicit of her memories, her feelings, her trials and tribulations, and if any of them make you uncomfortable, then I dare say she did her job right.

Marshall Gu hails from Toronto. He has had poems and short stories published in the Dalhousie Review, the Spadina Literary Review, Untethered Magazine, Cypress Press, and Clay Literary. He is a contributor to the Tone Glow newsletter of experimental music. This is his first book review.