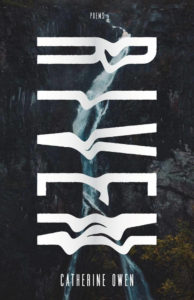 Catherine Owen’s Riven is a collection of poems woven together to blend the feeling of loss with the introspection of life offered by the river. Captivating imagery engulfs the reader, allowing them to be transported to the banks of the Fraser River; to smell the moss growing on tree stumps, to hear water lapping against river’s edge, to be entirely encompassed by the sounds of nature in its purest form.

Humans have always settled near the water, and Owen transcendentally moves the readers to the banks of the Fraser River to explain different life lessons, as told by the rushing water and all other organisms present in the river setting. The loss of life is transcribed by the author in such a manner that is exploitative of the circle of life as told from the point of view of loss-veiled eyes.

In many instances, the author allows the readers to two different perspectives; the first coming from the individual emotion conveyed due to the loss of her loved one, whereas the second is metaphysical in nature and focuses on external surroundings. Metaphorically, the river acts as a representation for the life and death we encounter throughout our lives, focusing on the loss, the hope, and the memories created throughout the navigation of life itself.

Though a majority of the grief-stricken content focuses on the natural aspects of Owen’s environment, it becomes apparent that even manmade structures exist in the serenity created by the banks of the river. These structures and their interaction within the ecosystems act as key players in the author’s understanding of the two worlds working with and within one another to create a complete picture. The water is ever flowing, ever moving, and this coincides beautifully with the ever-changing landscape of human nature and the effects of manmade structures as they mingle with nature:

Prolong me along the estuary

where the cataclysmic wildflowers, all their poppy-joy- vermillion smitten in pointillist manifold burgeon

and there are discarded rust hangers too beautiful not to be unwedged from granite and shouldered home, such bolds & rivers of ruin. (14)

Throughout Riven, readers are taken on an introspective, personal, and relatable journey through the evolution of love, loss, and the memories that flow in the same manner the Fraser River flows through the Greater Vancouver region. Despite the heavy themes present throughout the collection of writing, Owen is a master of her craft, giving readers the opportunity to float verse after verse with a melodic approach.

Just like the waves lapping the shore, flicking the banks with its soothing tongue, Riven captivates, moves, and encourages readers to delve into contemplation and raw emotion, all whilst connecting to the serenity of nature. Through life, loss, and the searing pain that memory can bring, Owen sums up her own collection with the single statement:

You will never entirely appreciate O River, which is what gave it this name. (78)

Bret Crowle is a recent university graduate living in the middle-of-nowhere, Alberta. You can find her with ink-stained hands, jotting ideas for poems and fiction pieces at nearly any nearby coffee shop.