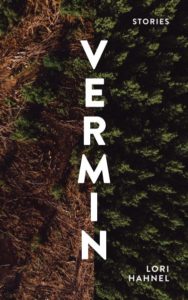 Though disparate in time and location, the stories in Lori Hahnel’s Vermin are bound by a common element: women who have lost—lost faith, love, freedom, innocence, friends, and occasionally themselves—and are seeking something new. In “Ask Your Mom,” Rachel teeters between childhood innocence and sexual awareness; “Good Friday, at the Westward” follows Cheryl on a shroom trip towards rebirth; the closing story, “A Good Long Life,” poses the question to both protagonist, Jenn, and the reader: which pieces of an unwanted past can’t you throw away, even if you try?

I did not expect a collection called Vermin to be a cheery one, and it’s not, but nor is the sadness without purpose. The heartache in Vermin is composed with an honestly about women’s lives and how often a woman’s circumstances can be buffeted by patriarchy, sexism, or a manipulative man who didn’t deserve her trust. “The Unchanging Sea,” “Awkward Positions,” and “Glory B” sink the reader into moments when women are betrayed by the men they are most intimate with. While each woman deals with betrayal in her own way, my favourite is easily Liz of “Awkward Positions” who decides in good humour to blackmail her married ex-lover.

The narrators in Vermin often review a scene in their mind instead of allowing readers to witness the scene and judge for themselves. This reflective style was most apparent in “Only Known Photograph of Chopin, 1849.” At the story’s opening, I was intrigued by the idea of a decentered narrative where Chopin is sidelined, but the narrator, Constantia, becomes a passive agent summarizing the life of her unrequited love: Constantia is touched but does not touch, listens but does not speak, reads love letters but does not write them. The excitement of Hahnel’s disruptively feminist set-up fades as Constantia’s own personhood is lost to reminiscence on the expected male center.

Hahnel’s tendency towards passive reminiscence contributes to the overwriting of some scenes and stories. “Good Friday, at the Westward” and “Chicken” come to moments of graphic epiphany—Cheryl vomits her shrooms, Julie vomits from shock—but instead of permitting the reader to linger in the visceral and tangible, Hahnel whisks everyone away to watch Cheryl and Julie both wake up, disoriented but safe, under a watchful paternal eye. In contrast, “Reference Question” ends the very second Hahnel sticks in the knife, and the close of “A Good Long Life” serves to end both the story and the collection as the narrator, Jenn, doesn’t quite manage to recycle a newspaper—and with it, some of the unwanted past—before being called away by her crying child.

Vermin ought to be disharmonious, but as I moved from one story to the next, Hahnel’s women clung to each another as if to say that however alone or outcast they may be in their own stories, however verminous their respective societies might consider them, if they just reached across the disparate time and space of Vermin’s pages, they could find a common sisterhood.

Kathryn Shalley is a writer and editor from Calgary who loves feminist literature, true crime, spec-fic, and spoiling her anxiety-ridden rescue dog. She holds a BA (hons) in English from Mount Royal University and an MFA in Writing from the University of Saskatchewan.