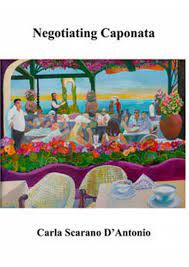 Carla Scarano D’Antonio’s Caponata arrived late last year and I devoured it in one sitting.  Enough time has passed now for the unique flavours to blend as they would in the caponata my mother prepared at the end of every season from her summer garden:  the marriage of sour eggplant with sweet bell pepper and tomato, the infusion of vinegar, capers to add just the right tang.

The themes and mood of this debut collection (fact-check) are alluded to in the prelude, a quotation drawn from Proust’s Swann’s Way:  “after the people are dead, things broken and scattered, taste and smell alone remain poised, remembering, waiting, hoping …”  (a free translation)

The collection is arranged in three movements proceeded by Pajarita, a tender and thoughtful poem that perhaps teaches us how to approach the works in the collection. How rich to learn that pajarita denotes three things:  a small bird, a bow which ties things together, and a piece of origami.

My thoughts are tiny ideograms

hidden in the folds of my paper bird …

How gentle the unfolding to find Scarano D’Antonio’s subtle poignancy.

In the first section Negotiating Caponata, it is revealed that this is not simply a guide to cooking; there are darker undertones:

Simmer for one hour or two.  Stir.

The aloofness at times.

The body has no protection

when the light dims.

Who knows what he thought.

Who knows what you concealed under the lids.

under the penetrating bade,

the flesh is soft and juicy.

The dizziness of the beaten eggs

mixing with black pepper and parmigiano.

filling the kitchen with thick vapour

in a bellicose conversation.

It is in the beating of the yolks plus sugar,

The egg cream where frustration releases

Along with this laden language, Scarano D’Antonio uses lush, evocative descriptions, a feast for the eyes and the other senses:

What I was leaving

Before the weather changes

into mist and dim light,

the trees turn gold and vermillion

The full moon is ricotta cheese in a sea of blueberry juice.

Their scent warms the house in reassuring airy blankets;

we walk through it as if it’s all we have longed for.

Some of the mystery of the tension and the unknown “he” of the first section become revealed in the second section, My Father’s Death.

I’m leaving to go back home

as light as a butterfly.

was sudden and ferocious

you knew we would scatter

into the dangerous world

in the dim light of the hospital room

This section ends with the poignancy of a difficult leave-taking, negotiating a leave-taking, uncertain if the situation will ever truly be resolved:

The ashes whirl in the wind, unstrained

mix in the roaring waves of the backwash

They splash on my legs

soak my skirt to the waist.

I wonder if they will leave stains

The third section In Touch releases us like the father’s ashes and we travel in time and place, before memory through an idyllic childhood tinged with the cruelty natural to children in Snake Eggs, via a poem to a daughter living in Tokyo, to a final place of tranquillity in Surrey, England, where Scarano D’Antonio now lives.

He in grey uniform and high boots, she in black dress and hat

This poem’s structure unique … ten verses which then are offered backwards, giving a sense of travelling forward and backward in time.

Mum during the war

piling them up, imagining to build a shelter

that would defy bombs

The city sinks into torrid August.

She is a sealed volcano.

We scooped them with care

and set them on a slab,

then crushed the soft white shell with stones

In Cyclamens for my mother, the theme of being uprooted and transplanted in a new environment are explored through verse:

Cyclamens for my mother

You were surprised they were blooming in summer

in my English house,

purpurascens from the Mediterranean

Although in this same poem as in a good caponata, there linger hints of the bittersweet:

The dead are calling you

The final poem in this section has an almost haiku quality, a capture of the moment and timelessness:

I measure with my thoughts

Which takes us to the epilogue of this collection, a different leave-taking, from the South of Europe, the warm Mediterranean to an arrival in England and all that North contains within its letters

As in any good amalgam, this collection of poems is stronger than the mere compilation of its distinct pieces.  The poems speak to each other, to the poems which proceeded and the poems which follow, and the overall effect is richly satisfying.  Arriving at the end has made me want to start again, this time savouring more intently each individual taste, ultimately learning the secret to Negotiating Caponata.