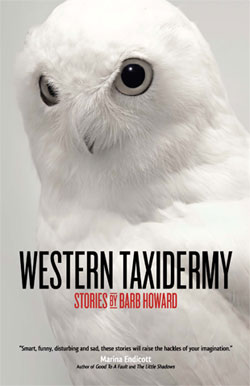 Annie Vigna A review of Western Taxidermy by Barb Howard NeWest Press ISBN 978-1-927063-11-8 $19.95 Western Taxidermy is a collection of sixteen new and previously published stories by Barb Howard, former-lawyer-turned-author. Some of the stories contain elements of satire, skillfully masking whispers of emotions. These stories explore perfection versus naturalness, and often provide lessons in empathy, as evidenced in The Smile that Bites. Even crotchety old women like Mrs. Wasnyk, despite her annoying habit of click-snapping the sections of her purse, deserve to be treated with courtesy. Juxtaposed to Mrs. Wasnyk and her reluctant young friend/chauffeur, is the little drama going on at the next table in Timmy Ho’s between a young mother and her toddler, illustrating an early lesson in courtesy and empathy.

Egos are stuffed. Hunted animals are stuffed. Little nylon sacks are stuffed. A large stuffed mouse is given as a gift. Brother Tom’s snakeskin shit-kickers are stuffed with the newspaper on which his obituary is written. A young woman’s “fibrousy red stuff like red algae” (62) is stuffed into a jar. Emotions are stuffed, as in “Breaking the Mould,” until they can no longer be contained or controlled.

Perhaps the picture of a stuffed white owl adorning the cover of this collection serves as a harbinger of what follows in these 196 pages. This predacious bird aptly introduces the title story, a gathering of “Rurban acreage [women]” (12) at a “baby celebration.” (9) Kay, the narrator, is a taxidermist whose client is Bob, the father of the baby girl, and husband of the new mother Deirdre, and a shameless flirt. Kay is clearly alien among the plastic women, all perfectly coiffed. She observes silently, “I know quite a bit about hair and I can tell you, there wasn’t a natural pelt at the party.” (11) Question: Why was she invited? Answer: Bob. “Everything I had done for Bob, five hunting season’s worth of work, was junked [in the basement trophy] room”. (15) As layers of the story are stripped away, the disenchanted Kay admits, “Maybe Bob just likes the hunt.” (16) She returns to her shop and works on an audacious revenge.

Howard’s irreverent stream of consciousness continues as each subsequent narrator tells the story. In “Big Fork Campground” a conscientious Jeanie takes charge of a poorly planned camping adventure by Craig, “legendary outdoorsman . . . asshole” (21) who passes out on her chest after a clumsy attempt at seduction in his tent that “looks like a body-bag.” (24)

“Basic Obedience” tells a poignant story of a father’s love for his daughter and her dog. The father sacrifices his time to take the dog to obedience classes while maintaining a safe distance from which to observe the upwardly-mobile boyfriend whom the father suspects is physically abusive to both his daughter and the dog.

“It’s all about control” (125) is the overriding tenet that advances the drama in “Mrs. Goodfellow’s Dog”. “And Mrs. Goodfellow wore an elegant velvet choker around her neck.” (122) Following the debacle of the dog getting out of his cage, and the furtive groping of the babysitter by Mr. Goodfellow, “She brought her hands to her neck and unclasped her velvet choker, letting it dangle like a pendulum from her fingers.” (131)

Unrequited love and a mutual determination to leave it in the twenty-year past are the emotions that prevail in “Still Making Time.” Nadia and Scott, separately and privately reminiscing about “the heat of a summer fling.” (182)

Whether Howard is describing the anguish a mother feels when her daughter leaves for university in another city Hydro Cyst, or the naϊvete of a newly divorced Paul who flees to the country with new dreams of reclaiming his manhood in “Marking Territory,” her writing seems effortless. Her wry sense of humour flawlessly teases out contemporary social characteristics and practises.

“Vacuuming the Dog” offers total comic relief. The pace and diction in this zany story is what drives the narration. It’s the kind of story that begs to be read aloud for extra appreciation. If I ever get the chance, I’ll ask Barb Howard to read this story to me.

When you are near a library or a bookstore, pick up a copy of Barb Howard’s Western Taxidermy. This is her fourth book. Her previous publications are Whipstock (NeWest Press, 2001); Notes for Monday (Recliner, 2009); The Dewpoint Show (Fitzhenry and Whiteside, 2010).