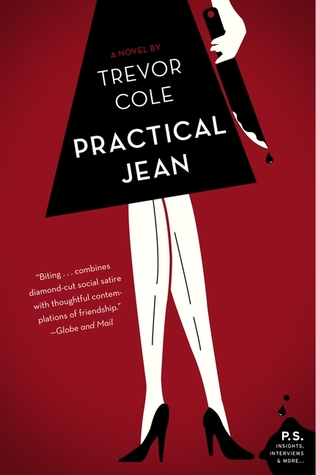 Kate Marlow
A review of
Practical Jean
by Trevor Cole

A whole life can be traced through fiction. To do this, we would start with soggy board-books that teach you to count and show you what farm animals feel like. You don’t stick with these books for very long: once you’ve outgrown them, you find your life instead reflected to you in picture books and fairy tales, stories that tell you that because you are a virtuous child, everything is possible. Then, cruelly, is the coming-of-age story: a narrative that insists on presenting you with the limitations of society, introducing you to the world that you’ll be navigating. Childlike purity is gone, replaced by awkward puberty. Take heart, though! It’s not all gloomy – after the coming-of-age story is the first-love story. The one that takes your breath away. The one that makes the world around you, limited or not, worth it. Then, when the world has been discovered, when one has come-of-age and has fallen in love, is the adult fiction; the stuff of heartbreak and human politics and glimmering hope and always more falling-in-love.

And then, far beyond the first-love story or the second-love story or the heartbreak story or the mundanely political adult story is Trevor Cole’s Practical Jean. Cole’s novel is a wicked narrative for adults who know better than to entrap themselves in the genre of tedious adult fiction. It is a deadpan examination of life, slicing through a fog of normalcy and demanding that a reader understand what is truly a priority: preserving happiness, no matter how fleeting or delicate in nature it is.

Enter Jean Vale Horemarsh; a protagonist who is just rounding midlife. Jean is, in expertly-crafted fashion, just slightly normal. She is just a smidgen too tall, more thickset than she’d like to be, and has a decent complexion. She’s nice enough, and has a few good friends. She’s in what can only be described as a normal marriage to Milt, a substitute teacher whom she loves dearly, knows too well and finds irksome. But, juxtaposed against this normal life is a childhood suggestive of deep psychological damage and an obsessive passion for creating delicate foliage out of ceramics. Not flowers, but their leaves: normal, everyday leaves that are more often than not forgotten.

Following the death of Jean’s terminally ill mother, Jean’s tendency to obsess begins to unfurl in a new direction. Instead of preserving the essence of verdure in her kiln, Jean attempts to preserve the happiness of her very best friends:

[Jean] gave the shovel a wave in the air, to get a feel for its heft and to line up her swing. But it was an old shovel, made of a kind of cast iron, and quite a bit heavier than she’d anticipated. So it travelled a few inches farther than she wanted and plunked Dorothy in the back of the head.
“Ow!” she said. “Jesus, Jean, what the hell? … that hurt,” said Dorothy, rubbing the back of her head.
“But… you’re still happy, aren’t you?”
Dorothy wobbled her head as if to clear it, then she straightened her hair and put her hands on her hips. She sighed, looking off toward her house. “Yes, I am.”
“Phew,” said Jean. She raised the shovel again over Dorothy’s head and brought it down like an axe. (110 – 111)

Practical Jean’s narrative is propelled through Jean’s calculated attempts to “preserve” the happiness of her four dearest friends. First, though, she must investigate the true nature of happiness: what can Jean do that would make each of her friends vividly, memorably happy? And how can Jean sustain this state long enough to preserve it? In her quest, Jean acts as the creator of pleasure and the curator of memories, allowing Cole to subtly prompt some not-so-subtle questions: what is the nature of happiness? Is it material goods? Really good wine? A simple life? Meaningful relationships? Jean’s examination of her friends acts as a critique for a handful of different worldviews. A reader will likely find herself reflected in at least one of Jean’s fated friends, wincing as Jean so aptly guesses and fulfills your darkest secrets before performing her gruesome act of preservation.

With a deliberately vivid narrative style and a wickedly macabre lens, Cole’s unremarkable characters become the subjects of attentive examination. So much so, that their normalcy becomes exaggerated and grotesque. Practical Jean is not just a hilarious romp through heartbreaking mediocrity. It is fiction for readers who know better than to be satisfied with a normal life and mundane stories.