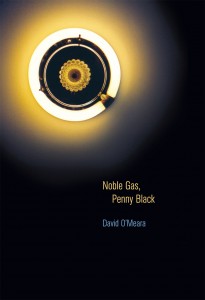 Micheline Maylor
a review of

David O’Meara’s third collection is a study in absences. This is not a collection of an optimist, nor a book of reverie. These poems ask that you, the reader, look offstage at what isn’t immediately on set. Through absence the poems reveal themselves wholly in terms of longing. In “This Age – after Ahkmatova” the mood of the book is reinforced.

Why are things worse than they’ve ever been?
Sometimes, distracted by the mind’s great grief,
we’d lop our own hand off to stop the pain,
then fidget with the stump so there’s never relief. (22)

Thematically, the poems seek some sort of relief and the authorial voice creates a distance between narrator and reader that holds the reader, at arm’s length. What is sought is always off stage, out of range. Perhaps an example of this is best shown in “I used to Live Around Here.”

I used to live around here:
two rooms, one window, a year’s lease.
After circling the park I’d climb the stair,
just sit, and watch the flags snap in the breeze.

We used to meet around here.
There’s a part of us left in these places:
a hand held, a look, a dumb joke. A mere
sketch resists what time erases.

But I was circling your absence then,
like a climber whose base camp is lost in snow. (47)

O’Meara’s observations, musings, never provide relief. They skirt the periphery rather like a dog patrolling territory, uneasy. Technically, the poems show a refinement of craft. The metrics and rhyme of this short piece are evidence of this skill. Yet, the distance of the narrative, the grey tone provide little room for an exhale, a sigh of relief. Sufficed to say, relief isn’t a value judgment or yardstick of quality. And the poet delivers much skill. But the tone is grey.

Thematically the book could fall under the “nothing new under the sun” category. O’Meara creates a lackadaisical sense of déjà vu. All this has happened before and will again. The palindromic, “Nothing” captures this theme in both content and form to create the best effects in terms of meaning.

“Nothing,” he said, “it’s nothing.”
Then nothing was said. Silence; nothing.

What she asked had come from nothing.
Sweet nothing, really, was all he said.

They cut their links like little wires, said
Nothing about it afterward, nothing.

All over nothing.
So never to talk of what they said

The collection is a tight program of skillful poems. It is no mistake that O’Meara’s skills place him on the judge’s panel at the Griffin prize this year. Indeed his work has the sense of a master craftsman, in the ilk of Don Coles or Don Domanski. The intimacy of loss, the perpetual seeking that is much a part of the human condition is finely wrought.