Book review of “Morning After You” by Carmelo Militano 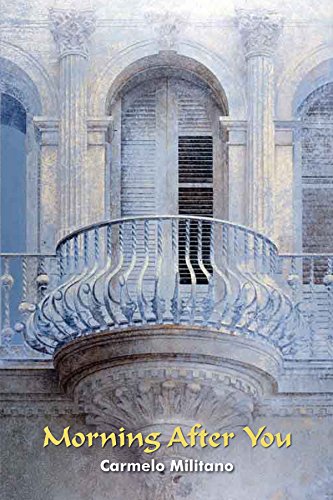 gillian harding-russell
a review of

Carmelo Militano writes from the perspective of an immigrant to Canada from Calabria, Italy whose landscape shares some similarities to the prairies in summer but provides more of a contrast in winter. As well as the freshness inherent in being a foreigner, Militano’s eye for detail and his imagist approach work together with a fondness for unexpected angles and surrealistic effects. Frequent allusions to English literature combined with homely images from his native Calabria weave irony and a layer of suggestion, and lend sophistication and a European homeliness to classical effect. Whereas in“ The Atlas” Militano uses a metaphysical conceit in the manner of Donne’s iconic image in “The Compass,” in “Bus stop, Main and Logan,” the poet builds the poem on an allusion to Ezra Pound’s “In a station of the metro.” Meanwhile, in “Winnipeg Noir,” a piling and patchwork of literary allusions is reminiscent of T. S. Eliot’s “The Wasteland.” Altogether there is a natural grace and energy to Militano’s writing while his experience builds on the tensions between his homeland with its weight of cultural history and the modern Winnipeg setting with its anonymous grey streets, between literary /classical traditions and a contemporary popular culture of poet societies in which the poet-speaker complains about “this ceaseless habit / of writing on shadows in the middle of the afternoon” (82). Humour and elegance and archness in the poet’s style and tone draw the reader in even as one detects a certain self-irony.

Reminding me of the scene with the rescue of the nun on the bridge in Ondaatje’s In the Skin of a Lion, Carmelo, in the opening poem, “Finding 17th Century Poetry on the Window Sill at the end of August in Italy” juxtaposes the sacred and profane and the historic and the contemporary. From the cool breeze that “swells the curtain of nine months,” with that image’s association with the gestation of pregnancy, the following lines liken the house to a “convent”:

white washed walls, with narrow black cross above the headboard
plain wooden chair turned away from the table
open closet door on an angle like the lid of a coffin (11)

Here raw juxtapositions and paradox are smoothed into long lines that flow with an unexpected mellifluousness, and the poem ends on the turn of yet another surprise association. While the female figure in the poem identified as “you” is pictured reading Marvel’s “To a Coy Mistress,” she turns away from the sun’s “winged chariot” to reveal her “full breasts / away from the modest Calabrian sun.” There is a naughtiness and a playfulness amid the erudition that entices the reader with intricacies of conflicting impression that have a net-effect of strengthening each others’ ironies.

Militano has a talent for erotic poetry, and this dramatization of the lovemaking is poignant through the freshness of his images. In droll romantic denouement, the speaker urges “the moon, stars, sun to return / send light back into the universe” while in “in a single, fitful blast simulating orgasm all the maps born under (the lover’s) skin” must be redrawn (Ibid.).
That the poet-speaker finds himself caught in a northern hemisphere where the skies are wintery and grey becomes most poignant in “November.” Here images drawn from Italy and the old world have the effect of accentuating the differences between Winnipeg in November and Calabria during its extended period of seasonal mildness. In these lines an implied old woman image captures the natural setting and humanizes it in an old-world way:

I imagine Ceres become an old crone as transported to winter and another hemisphere while biding her time until her daughter, Proserpina, may return to her for a visit in the spring.
In the closing lines, the poet is impelled to “undress the evening “with the invasion of a thousand sighs” and he feels a detached association with the moon pictured with “a fat crooked smile” that reminds this reader of Hades in his craven and slightly disturbing marriage to Proserpina after taking advantage of her having eaten three seeds of a pomegranate (Ibid.).
Unlike “November” in which the poet makes contrasts between the current and remembered setting, in the summer poem “Light and Sky in Winnipeg” the poet discovers surprising similarities between Winnipeg and his memory of Calabria which might even convince the reader that he has come to welcome his new home, at least during the summer.

In these lines, Militano brings alive the current setting by allowing his Italian experience to influence and add resonance to our seeing what may otherwise be too familiar and taken for granted. As do the romantic and classical poets, Militano uses personification (usually considered too formal contemporary poetry) that comes naturally to him and does not feel imposed in reference to this western Canadian city as seen through Mediterranean eyes.                            In “Winnipeg Noir,” carrying the subtitle “suite of poems at the intersection of who we were and who we are,” Militano similarly brings together classical and contemporary allusions.
The Latin phrase “pulchritudinous night” may to our modern ears sound closer to ‘putrid” than beautiful,’ and what follows suggests how this speaker’s disenchanted romantic view may have been converted to one who now discovers pleasure in the city’s salacious or ordinary fare. The following anaphora beginning with ‘the city’ combines a choral effect (characteristic of Greek drama) with something like modern rap (as Militano would read the poem aloud in a coffee shop):

City where the streets are shiny with pools of wet light
City where a cat slips under the fence at midnight
City of broken streets, big box stores and broken houses
beside the red-wheel barrow Williams insisted we see for the first time
City where you find yourself and lose yourself over and over again (76)

“What remains” for this disillusioned but somehow invigorated speaker is the “Holy Trinity of   coffee, fries and burgers, hissing like/lovers” (Ibid).
Here is a poetry collection that juxtaposes classical and modern traditions as returning to the poet-speaker’s homeland of Calabria, Italy as well as offering a unique immigrant slant on the city of Winnipeg itself.