Book Review of “I Know Who You Remind Me Of” by Naomi K. Lewis

Ryan Stromquist
A review of 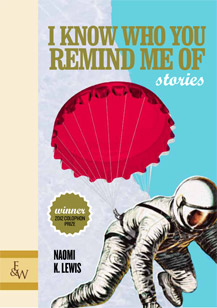 Naomi K. Lewis’ I Know Who You Remind Me Of is a collection of nine short stories. Lewis playfully toys with the art of narrative like a clockmaker. Each part is carefully examined but the whole is never compromised. Instead, Lewis invites you into her world: an intimate portrayal of sexuality juxtaposed against sensuality. The tone is set with her first story “Warp,” which depicts the main character, Karen, in a sexual coming-of-age yarn.

Why did Gavin have to be so nice to her, staring hard, like he’d never forget her? Why did he have to sleep with his forehead pressed between her shoulder blades? And why did she never believe him when he reminded her he didn’t love her, was biding his time, waiting for someone real? (24)

These lines show that Karen realizes that her sexuality is intrinsically linked with how others view her, which leads her to an epiphany of loneliness. I love this story not because Lewis paints a vivid picture (she does), not because the dialogue springs off the page (it does), but because each sentence is ripe with insight. Consider the lines: “[h]ardly anything was really her . . . without him telling her, she would never have even guessed that Green Day was okay to like, but Aerosmith wasn’t” (24). Lines like these display the painful truths of the awareness of adolescent innocence.

In “Weft,” her character Ben claims: “I’ve been questioning the dichotomy between intimacy and loneliness” (134), which becomes a central discussion recurring throughout the stories. Indeed, each of Lewis’ characters are struggling with intimacy in one way or another, whether it’s intimacy leading to loneliness in “Warp,” yearning for lost intimacy in “Nix and Six,” or the desire for intimacy in “Seesaw.” Connecting each story with the dominant themes of sexuality, sensuality, intimacy, and loneliness, I Know Who You Remind Me Of maintains a tight knit narrative that never falters. A story like “Flex,” which is uniquely told through the span of a week, forwards and backwards, walks a tightrope of plot, yet never allows the plot to strangle the writing.

Referencing the act of writing, Hemingway wrote: “[w]rite the truest sentence that you know;” Lewis’ I Know Who You Remind Me Of is an exercise in the “truest sentence.” Lewis wastes no words; rather, each sentence is imbued with wisdom:

She pressed her pelvis up against his and closed her eyes, lifted her face, lips parted. He ground her hips down against the bottom of the tub, and she grunted in discomfort, but then she smiled. Ben tugged her knees, sliding her until her head dunked under water. She came up sputtering, coughing with her mouth wide open like a little kid’s in a swimming pool. He kept her arms pinned down so she had to hold her face above water with the strength of her neck, and she freaked out, wiggling like a fish. He released her arms. (141)

So much is said here with so little. With very little descriptors Lewis is able to create fully formed characters with movement alone. The characters’ distaste for one another was beautiful. Rarely have I pondered a line, “[p]rofoundly distasteful” (141), and wondered if the character both simultaneously believed and didn’t believe it. It is this indecisiveness that humanizes Lewis’ characters. Lewis writes: “Some things are describable, that’s all, and some things aren’t” (113), but I get the feeling that Lewis doesn’t come across much she can’t describe.