Book Review of “Any Bright Horse” by Lisa Pasold 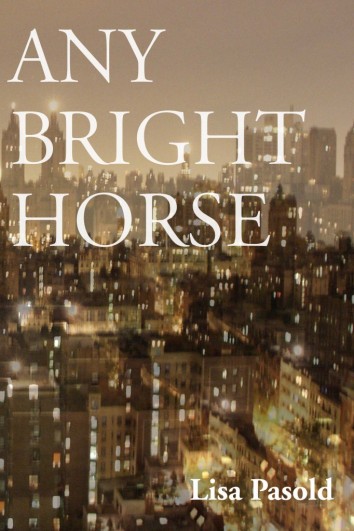 Beth Everest
A review of
Any Bright Horse
by Lisa Pasold

What intrigues me most about Lisa Pasold’s poetic narrative is the perspective. The book contains six sections, alternating focus between Marco Polo’s journeys and those of a contemporary dancer. But this is what happens: after we are introduced to Marco Polo and his stories, the contemporary narrator wonders “what if my neighbor believes he is Marco Polo” (33). Once suggested, their stories overlap. As Polo’s stories are recorded by Rusticello and given to the world in many versions, so the dancer’s stories are told by her neighbor in the second person perspective and thereby involve not only the dancer but the reader as imaginary participants. Of course, all of this is filtered through Pasold’s imagination and scribed by her.

Any Bright Horse is also a narrative about narrative, and while this trope has been done many times before, Pasold’s strength is in her words. Her narrator asks, “what if I tell him every story I know…/ what will he tell me in return?/ A red bird released from his hands, flying distantly” (33). Red becomes an important symbol of release and desire, as does the horse, “more noble, more ready to rise up” (52), “a mare with a shaking mane and a route across the snow (55). Poetic elements such as these capture the wonder, the fantasy, the fantastic. All this mixed with the reality.

The reader doesn’t get bogged down by questions of belief and truth, however, but is taken up by the energy of the narrative and the clever anachronistic details. For example, Marco Polo stands at the border before the customs guard:

I ripped open the seams of my clothes
with the bronze nib of a pen designed to fill in
dishonest declaration forms. I tore those seams and
they spilled into my fingers so I might give her
strings of pearls white as the eyes of snakes,
handfuls of uncut rubies that sparkled with
congealed blood (15)

Here one can see Pasold’s wry smile as she combines the historical with the contemporary, with political commentary, and multiple narrators speaking through one voice. Or as Pasold says, “Is he speaking only for himself, or for us all?” (22). We don’t even need to ask whose stories are these anyway, because it doesn’t seem to matter, “That whatever it was, was red and moving, leaping/partly from joy, that’s what it seemed” (34).

Any Bright Horse is a journey narrative, but the journey itself is not Pasold’s focus so much as is the impact of the return and the telling of the journey. Or at least the story of the journey as it has been told by the layers of narration, ultimately Pasold’s narration, but filtered through Rusticello or the touring dancer with a wounded ear and specks in her eyes, and the dancer’s neighbor. Of course, they are not making the journey for the sake of the journey, but are on a quest to bring back “the rock, the gem, the object….and if you are lucky and brave and if you find your way, you’ll come back with the story, with the word” (101). The problem is, of course, that on your return, “you enclose all that ocean within/ your mind. No wonder you can’t rest. You have returned/ speaking a language your neighbors refuse/ to understand” (11). I question, however, if it is not a refusal but an inability to understand; as Pasold reminds us, those on the journey are changed by the journey, and those who have not gone cannot know what they cannot know. As the Venetian commander says, “I did not know how greatly a cold thing could be missed, like ice,/ melting” (81).

What is certain, however, is that the narrator can spellbind. And s/he does:
The Genoese children chant, Messer Marco, tell us another lie….Oh amuse us, we grow impatient! (85).