Review of “Left” by Theanna Bischoff 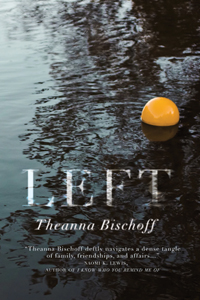 I am a sucker for a good mystery. Theanna Bischoff’s LEFT is a good mystery. Set in Calgary, AB between 1981 and 2013, it is a tale spanning generations told in what feels like multiple short stories. 29-year-old Natasha has gone missing leaving behind her pregnant, 18-year-old sister, Abby, who was living with her. Foul play is the most likely suspect and I couldn’t put the book down until I had answers. The novel’s mysteries reveal themselves through a series of chapters, switching between the points of view of important players in Natasha’s life and disappearance. The chapters either reveal moments that shaped Natasha’s life leading up to the day she went missing or dips into the secrets of those around her. Do any of these revelations reveal the mystery behind her disappearance?

Like any good mystery, there are twists and turns, possible who done its, and family tensions that can either get worse or dissolve under the pressure. Abby has been estranged from her parents since her pregnancy, her feelings summed up in the line “[my mom] ambushed me with a hug yesterday, her skeleton arms trapping me, while I just stood there, waiting for it to be over” (55). Losing Natasha, her rock in the world seems to affect Abby the most. Each chapter dedicated to Abby’s voice is a one-sided conversation she is having with her sister. Natasha’s loss binds people who may otherwise have to grow apart, as they create a partially chosen and partially forced-together-by-circumstance family to help Abby raise her child, something they all know Natasha would have done.

Left is not just a good mystery, though. It is the slow torture of grief and longing while waiting for the conclusion of a body. The novel follows the characters from those first few hours of panic and fear when Natasha doesn’t come home to the years of maybe’s and what if’s that follow. I felt memories of my own fears bubble up: the first time I lost sight and sound of my daughter; the first time she walked home alone from the school bus and I watched the clock at work, minute by minute until she called to say she was home; the first time she wasn’t home and I couldn’t get a hold of her. But my daughter always came home and I got to sigh relief that the worst had not happened. Bischoff’s novel is not about the sigh. It is a collective waiting of Natasha’s family and friends, the detective, and the reader, all holding their breath, hoping the phone will ring.

Crystal Mackenzie is writer, editor, and environmental activist in Calgary. She writes out of her childhood home where a postcard view of downtown and the Rocky Mountains often distracts her. Other welcomed distractions in her life are her daughter’s ever-evolving views on humanity, long discussions with her partner Ryan, and wine. Crystal is most inspired in her own writing when exploring the Rocky Mountains or the banks of the Bow River.