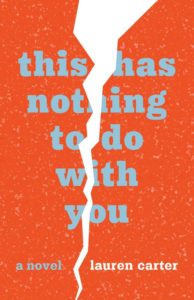 “We were a family that kept secrets.” This quote, which opens a section late in the novel, struck me as important to understanding both the plot and the structure of this well-crafted narrative. The main character, Mel, faces two options as the novel progresses: running from her mother’s murderous past, or finding out more about that fateful day. These two options slowly narrow into one seemingly unavoidable path, as her investigations seem inevitable, even fated. As Mel figures out the secrets of her family, her own secrets slowly unravel before the reader in a truly captivating way. Mel’s history in the cave, her friendship with Lara, and her brother Matt’s newer secrets unfurl themselves with impeccable timing, and give the reader a sense of connection to Mel–the desire to learn more about a loved one, as reader and protagonist become bound by secrets and fate.

The idea of fate is present throughout this novel, as basically all of the characters mentioned above seem bound together, forcing one another to acknowledge and grow from their guilts. Whether it is the guilt of a lost friendship, a lost family member, or a lost path, these character interactions all prove to be a turning point from which Mel and others can reconcile their past and present lives. These themes, while well done throughout the novel, can feel a little heavy handed at times. They were certainly not poorly done, but I had a couple ‘yeah. I get it already’ moments. Outside of these moments, the plot, themes, and motifs kept me engaged–a quick read despite the length of the novel, and one that is hard to put down once started.

The characters are possibly the most compelling part of this novel. Earlier in the review, I referred to Mel as a loved one, and it honestly felt like that at times, as if I was reading letters or having coffee with a close friend who was slowly spilling the tea. There are many characters, and at first I was worried that quality would not be spread over all that quantity, but each character is not only well-constructed, unique, and interesting, but so many of these characters change and shift, growing throughout the story as they make new connections and realizations. Perhaps the character that best exemplifies this character progression, outside of Matt and Mel, was Grommet. I never thought I would get so invested in the story of a dog. However, Grommet was an integral part of the story; while he himself changed during the novel, he also served as a catalyst for much of Mel’s developments which was interesting to see from an unlikely source.

The novel is a brilliant collection of characters, acting as a strong supporting role for Mel as she learns to forgive and learns to live. Lauren Carter’s This Has Nothing To Do With You is an enjoyable read, and I fully recommend this for anyone who wants to lose themselves in a book for 370 pages of mystery, love, family, and growth.

Categories: Reviews, Reviews - The NovelJanuary 31, 2021
Tags: FreeFall MagazineLauren Carterskylar kaythis has nothing to do with you
Recent posts
Categories
Go to Top