Review of “I Will Be Corrupted” by Joseph A. Dandurand 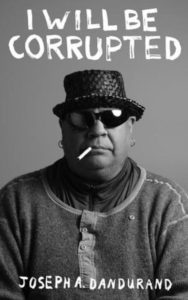 Joseph A Dandurand’s thirteenth book of poetry, I Will Be Corrupted, is a powerful work in its depth and craft and beautiful in its simplicity and form. With raw, relentless energy, Dandurand, a member of Kwantlen First Nation on the Fraser River near Vancouver, writes honestly about his life and past: the trauma caused by colonialism, Catholicism, addiction, and trauma, as well as the healing found in cultural traditions, spirituality, fishing, and writing. I Will Be Corrupted is a mature work that finds a measure of acceptance in past injuries and mistakes but also acknowledges a complicated future. For Dandurand, ‘corruption’ is turned on its head and becomes a channel of healing.

The poems in I Will Be Corrupted are all written in breathless, run-on sentences, a mode that pulls the reader along with the poet through his madcap misadventures of youth, his time in the east end of Vancouver, and his struggles with the inner demons threatening to take him over. However, these long sentences are broken neatly into phrases reminiscent of Al Purdy’s poems, allowing the reader time to process the incoming river of words:

today I fight the demons
in my mind who show
up from time to time
…so I walk into
the river and I dunk
myself four times…
I step out of the water
and all the demons retreat
into the tree and on the
tallest tree sits an eagle
who whistles to me
and in the deep corner
of my eye I see the words
forming in a silhouette
of forgiveness
and the
word
I see
is
mercy.

(from “Deep in the corner of my eye”)

The end of each poem repeats the form seen in the quote above; the last stanza tails off into a column of words, usually a handful of lines long. The effect is that of a feather, with a narrow quill at the end. While I don’t presume to know the full significance of the feather’s symbology for Dandurand or his culture, I would like to think that each poem is a feather held out to the reader, asking us first of all: listen. The last few words that form the quill are rarely throwaway lines or a simple summation of the poem; instead, Dandurand manages to write them into strong, often poignant and existential statements that skillfully close out the piece.

I Will Be Corrupted begins with the voice of a poet who has not only experienced the rawness of life, but also who has learned to accept life as it is:

Dandurand first hints at, and then exposes, the trauma he experienced growing up. Layer by layer is peeled back—we see the violence and fighting, the drinking and drugs—nothing is sugar-coated. With the oppressive coercion applied by colonialism through, in part, the Catholic Church, it’s no wonder the poet can say,

(From “The magic of guilt”)

Yet Dandurand comes to a place of healing: “and I can look into the mirror / and I am no longer ashamed / of the scars on my face…” (from “She stands”)

The narrator finds healing in gratitude for life and for his children, for the fish in the river, and for his cultural traditions that connect him to the earth. He sits around an ancient fire made by sasquatch and has tea with him the way his ancestors have done for generations; he drums and sings with his people.

What complicates the themes in this book, in spite of its seemingly simplistic diction, is embedded in the future tense of the title: I Will Be Corrupted. As the reader journeys through the book, corruption is flipped on its head. While in the east end, drugs and sex were a corruption (and more so through the Catholic lens), but now ‘corruption’ becomes a vehicle of healing:

(from “Always her eyes”)

This complex view of healing ripples into the future –not only has the poet been corrupted in the past, he will be in the future—and whether this is to be read as a message of hope, or as a reality, that is, mixed with both hope and despair, is left to the reader.

Al Rempel has three books of poetry, Undiscovered Country, This Isn’t the Apocalypse We Hoped For, and Understories, as well as several chapbooks, most recently, Deerness. His poetry has been published in a variety of journals and anthologies, and his videopoem collaborations have been recognized internationally. You can find him at www.alrempel.com