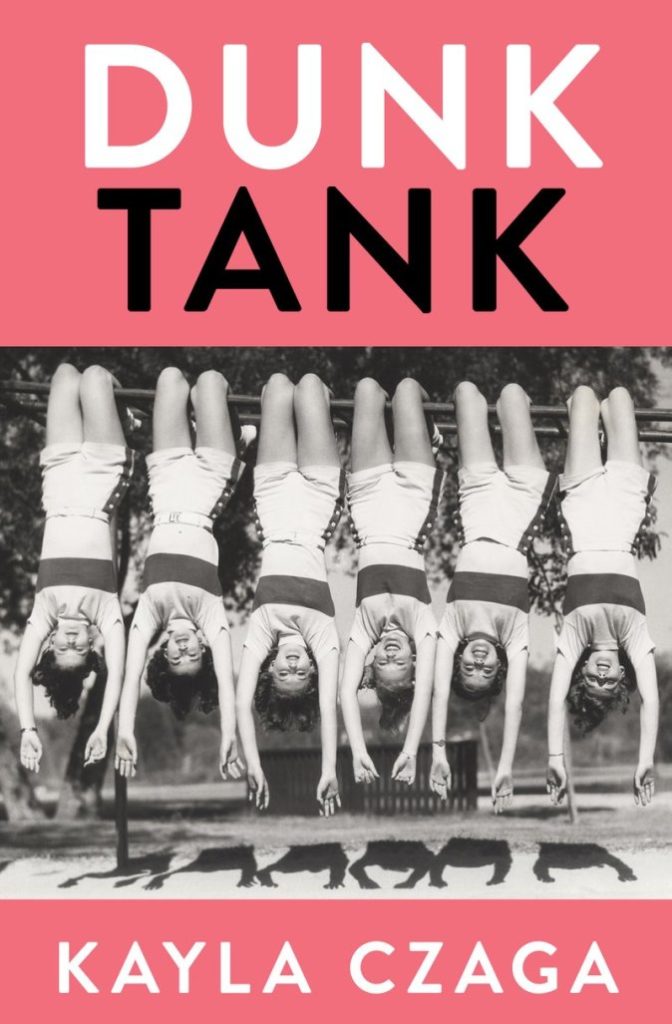 The poetry gods claim that a second book is much harder than the first because the bar is set. Both of these spring releases come from poets highly recognized by the LPC’s first book award.

Kayla Czaga’s Dunk Tank is an inventory of the folly of youth as tinted by darkness and surrealism. She manages to capture moments of growing up with the wisdom of a backward glance. The book is a fulsome diary of growing up with all its pitfalls, confusions, and absurdity. The narrator reflects with the honesty of distance and time; such an example comes from “Synchronized Eye-Rolling”: “Oh, you were inept and sweaty / but everything was urgent enough / to be the season finale, every day.” We meet characters who push boundaries and hone the author’s maturity.

Czaga’s job is to then distill the wisdom of these moments into something meaningful and inviting for an outside reader.

And, Czaga does her job well. Embedded throughout the poems are nuggets of wisdom that transcend her single experience and become existential and highly relatable. Here is a moment from the poem titled, “Dunk Tank” in which she is posed on the target chair:

. . . The wind sighs like it’s locked
its keys in its car. You’re sitting
on your chair, smart girl, only
your chair drops and before you fall
there’s a moment you’re sitting
on nothing and you think maybe
you won’t fall after all – maybe
you’ll just hover here forever.

What person hasn’t hoped for time to stop in order to suspend a disaster? Czaga follows this poem with “Drunk River”, in which a girl is caught in a situation that turns very wrong very fast, evocative of the story “Cat Person” published in the NY Times underscoring problems with consent and dating. Czaga handles the situation so adeptly that the situation is unforeseeable from the start of the poem. The narrative twists are efficient and leave the reader a bit wide eyed and stunned at the end. Like the girl in the poem we, the readers, are taken for a ride that was far different than what was promised. Moments like these, where the underneath and underbelly of situations are exposed, show insightful consideration of the situation.

Czaga continues on, somehow managing to handle the paradox of the ridiculous while deeply exposing the idiosyncrasy of human nature. “One Christmas, Santa gave you a set of panties / so jumbo you called them thunderpants. . . believing your butt / would become a skydiver or even prime minister.” Czaga’s contemporary voice captures a promising wisdom and is the sort of book that many of my students would find relatable and skillful in both poetics and narrative detail.

Micheline Maylor is the co-founder of the FreeFall Literary Society of Calgary and the editor-in-chief of FreeFall Magazine. This review was originally published in Quill and Quire.