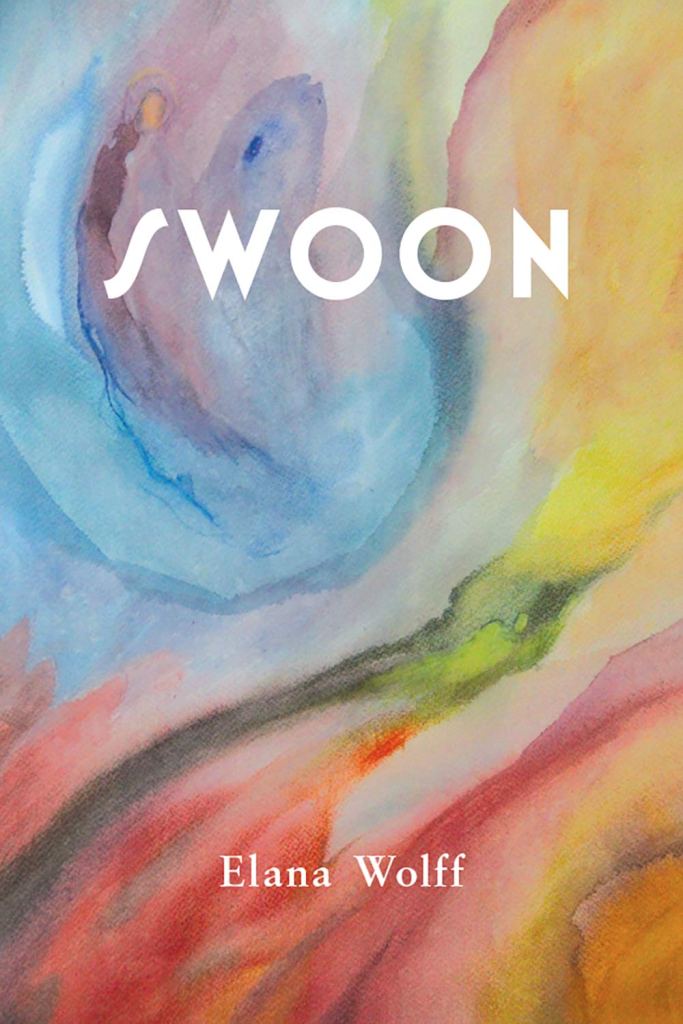 Elana Wolff’s sixth poetry collection uses epigraphs that connote various meanings of “swoon:” The Living Torah’s example of Rebecca’s falling off a camel in a shock of elation at seeing Isaac; Elizabeth Barrett Browning’s slow swoon of life creeping back; Robert Walser’s example of a violent delight; and Franz Kafka’s “swooning counts as believing.” Wolff’s abstract cover painting detail (from her own “Elemental”) is a visual swoon of its own in its strong curves that portend something powerful and mood-driven. Building on her compulsion of perception in her fifth collection, Everything Reminds You of Something Else, and its spare, introspective, elliptical, and heart-probing lyrics, Swoon puts the reader “at the crux of wonderment/& tech sophistication,” with poems that are stunningly meditative, ekphrastic, and intense while being musical even in their intrinsic tensions.

The opening poem, “The Months of Flooding,” is a template in its technical devices and strategies, using strong sonic emphases by way of alliteration (“mantic movie music”), internal rhyme (“more rain fell than could drain”), assonance with variations in sound of a single vowel, repetition, amplification, questioning, and a sharp final word that seals the poem. Wolff’s pointing to transcendence after turbulence is a hallmark. Her book seeks to move from conflating and animating dreams or reveries of inner worlds to transcendental insights. In other words, there is an epistemological and metaphysical impetus, without bullying or coercing the reader. There is no rule, law, or injunction in the poems. They build from quotidian reality, and they portray a poet in ordinary acts, such as riding a bus or train, reading and daydreaming, gardening, walking, dancing, exploring new cities, housework, or simply watching or listening to what is at hand. She can seem passively at rest but her mind always moves on this stillness or to ambient sounds, as in “Messenger Suite,” where she internalizes birdsong or bird behaviour in little odes featuring dualities and often sharp shifts of tone or perception in the final line. An example of clear duality shows in “Gull”:

there are really two voices at work.
One that needs to cry out
and one that cries to be reached.

And there is “Rook” with its foreshadowing and final shock line:

Feathers the colour of onyx,
colour of toenails—
black and bruised.
Language coarse as curse.
Blatant gaze, as if to say, It’s your turn,
meaning mine.

In the garden,
on my knees, I offer you some plum.
This is how you came to jab my hand.

One of the dominant tensions is in the very dualities of self and the world. Such dualities need not overwhelm the subject, as Wolff focusses on the poignancies of individual life, as in “Tone Poem” with its explicitly depicted “two selves”:

We’ve been living with two selves all along—
the one we’re slowly getting to know
& the witnessing one: becoming.
Stunned from seeing the ugly double—

Being a photographer and painter herself, (in five instances, she offers ekphrastics, occasioned by other artists’ pieces), Wolff often treats poems like photographs or paintings:

The Sea Wall helps, and walking along it,
resting on a shady slope—grass: green water and lignin.
The bay-scape as imagined in a mythopoetic vision:
seagulls, those immortal horses, reeling to the heights.
(“Simple Cyan”)

Whether she is recalling girlhood experiences, studying a finger’s lunula, writing about musing, sleep’s “cosmologic music,” or depicting the interruption of thought by ambient sound, she is an expert at variations of rhythm and mood. A striking example of her virtuosity can be had in “Ovarian,” which interrupts a dramatic scene about ovarian cancer with an image of a mother duck guarding her eggs in a poignant vignette, managing in the process to fuse the two while suggesting in the final two lines that what was left unsaid was what mattered finally:

You’ll be in the waiting room, I said,
that windowless cube, joking just a little for reprieve.

Your being there will make me right, is what I didn’t say—
like when you blow the candles on a cake and make a wish.

But, perhaps, the most remarkable example of her virtuosity is in “After Badiou,” which mimics the form of the French philosopher’s reflections on truth. Alain Badiou maintained that for a truth to affirm its newness, there must be a supplement committed to chance, and so in her poem, Wolff begins with compressed epigrams or philosophic precepts that she distills while reading Badiou before she is interrupted by the sudden sound and sight of a pair of sneakers tossed onto a telephone wire:

They’re dangling in the
winter wind, one above the other. Maybe it’s the mix
of music playing in the coffeehouse; it’s sad and I’m
distracted from my reading. The wind dies down and then
picks up. The sneakers follow suit. The one below begins
to flap and nod like the head of a bobble doll. The one
above is close to the wire: almost stationary. Steady
in its accidental landing.

This corresponds with Badiou’s tenets about truth by accident or chance, where a truth emerges by a momentary rupture in being or appearance. But it all fits with Wolff’s startlings (much in the mode of Louise Gluck) in a world of feeling and thought—in other words, the swoon of her poetic mind.

Keith Garebian has published 27 books to date, eight of which are poetry collections, the most recent being Against Forgetting (2019). Several of his poems have been anthologized in Canada and the U.S. His work has been translated into French, Armenian, Hebrew, Bulgarian, and Romanian.