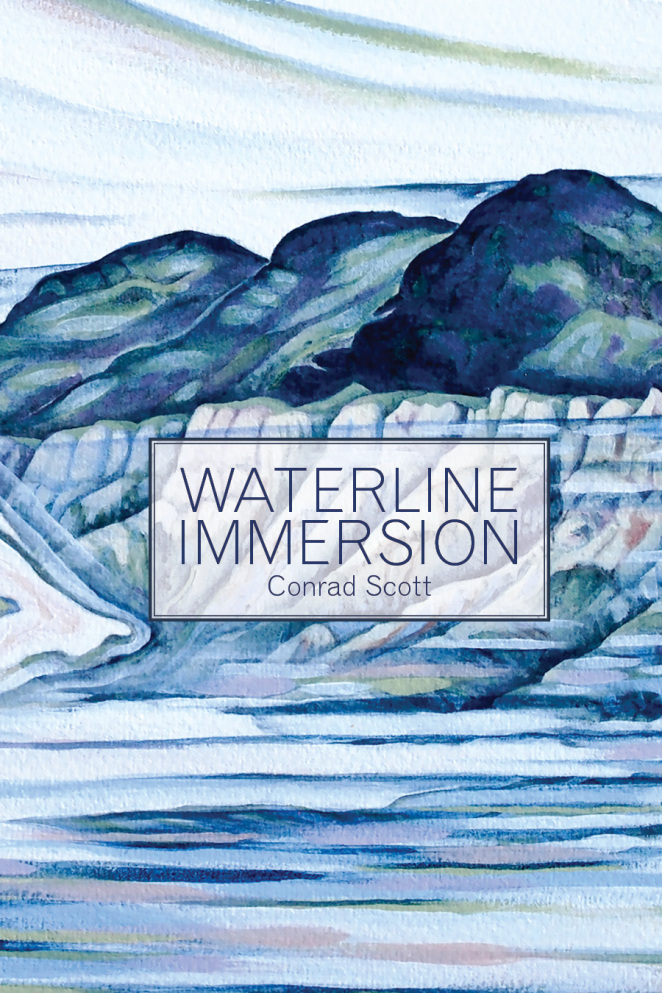 In Waterline Immersion, Conrad Scott enacts the birth of the world using language that shifts tectonically under our feet—histo-geographic, anthropological, geological, mythic, personal—telling every story, all narratives, via Egypt (Horus), Norway (Odin), Iceland (Poetic Edda), and his own genealogy via Denmark, Ireland, France, Scotland. Yes, this book is ambitious. It’s also riveting.

Canadian geology is the central focus. Scott figuratively excavates Kamloops and Acadia and Glacial Lake Thompson—always seeking the heart of the place, keeping history, and “the long view of time” (33) in mind. “We all,” he says, “journey back to the glacier” (30). At times the mythic language of Waterline Immersion echoes Seamus Heaney’s North “leathery old stench of the bog,” (16) and Charles Olson’s Maximus Poems “All memory now / hunches / in glaciers of the mind / as we speak ourselves / into thawing,” (31). Scott’s mentor Don McKay—the book Strike/Slip in particular—was an inspiration.

Scott balances mytho-geological deep-dives with sobering reminders of climate change “Fossil elixirs consumed, / our synapses stray to lethargic—/ a stutter of generators on fumes,” (71), and with feminist and colonialist critiques. Yet, to me, the book’s strength is not in its overt messages (however worthy), but in the sheer plurality of its references and lenses: academic research, historical documents, critical theory, conversations, voices, songs, observations, opinions, ancestral charts, and of course poems. Together, it doesn’t seem entirely cohesive. But why should it? The clash of styles and genres and voices culminates in energy, and need not be reconciled into a tame theme book. Because, simply, the story of our beginnings is less a single story than a polyphonic outpouring. Scott allows the various threads to remain deliciously messy, or immersive, as the world itself is. As a result, Waterline Immersion is—as Keats famously said of Negative Capability—“capable of being in uncertainties, mysteries, doubts, without any irritable reaching after fact and reason.” Much of the best art conveys a sense of collage-like plurality and accumulation, impervious to pigeonholing, such as the work of Jean-Michel Basquiat, Robert Rauschenberg, Jenny Holzer, and William Carlos Williams. My hope is that this book, Scott’s first collection, will eventually become part of a much larger project—Scott’s life work—like Williams’ masterpiece, Paterson.

There is plenty to reward the poetry lover who dares enter this “uncertain” landscape. Scott has created a dynamic persona, an “I” voice that shimmies and darts from genre to genre, morphing in each distinctive space like Nanabush herself. Sometimes the “I” seems to speak for the land itself: “I am the water the ferryman crosses” (75). Sometimes the voice seems to arise out of a collective sense of self: “You stratify me—/ your silence of eons / compresses my thoughts” (34). Other times the anagogic voice turns personal, tender: “I feel a zen-high of withdrawal / humming with the mountain. / Tasting your fervent evergreen / on my tongue tip, / my forearm braced forward / as if always crashing / always full of crashing stillness” (81).

The very last line, “We all come from the same rivers and valleys” (92), contains Scott’s yearning for connections between people. Somehow, Waterline Immersion—whose scope and range are enviable, and whose
every page gushes like a river overflowing its banks—remains refreshingly compassionate and humble.

John Wall Barger’s poems have appeared in American Poetry Review, Alaska Quarterly Review, Rattle, The Cincinnati Review, Poetry Ireland Review, and Best of the Best Canadian Poetry. His fourth book is The Mean Game (Palimpsest Press, 2019). He lives in Philadelphia and teaches a poetry workshop at The University of the Arts. Find him at http://www.johnwallbarger.com.