Book Review of “All My Puny Sorrows” 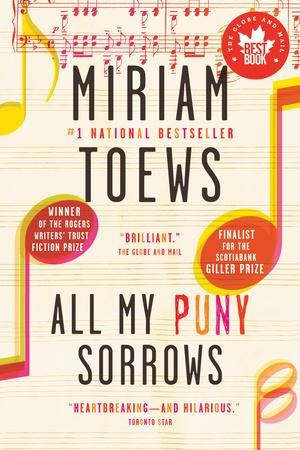 Annie Vigna
A review of

The title of Miriam Toews’s latest novel was taken from a line in a poem by 18th Century poet Samuel Taylor Coleridge, a portion of which I quote (my emphasis):

To A Friend, With An Unfinished Poem
Thus far my scanty brain hath built the rhyme
Elaborate and swelling; ­ yet the heart
Not owns it. From thy spirit-breathing powers
I ask not now, my friend! the aiding verse
Tedious to thee, and from thy anxious thought
Of dissonant mood. In fancy (well I know)
From business wand’ring far and local cares,
Thou creepest round a dear-loved sister’s bed
With noiseless step, and watchest the faint look,
Soothing each pang with fond solicitude,
And tenderest tones medicinal of love.
I, too, a sister had, an only sister —
She loved me dearly, and I doted on her;
To her I pour’d forth all my puny sorrows;
(As a sick patient in a nurse’s arms,)
And of the heart those hidden maladies ­
That e’en from friendship’s eye will shrink ashamed.

The characters are unforgettable. Elfrieda (Elf) and Yolanda (Yoli), sisters. Elfrieda is beautiful, wealthy, sophisticated, happily married, and an internationally acclaimed pianist; yet, she wants to die. Yolanda is opposite, divorced, broke, looking for love with all the wrong partners, reckless: a mess. She bumbles along, with best intentions trying to keep her teenage kids happy–also her mother. And she wants so much to help her sister live. She loves her sister. How much does she love her? What kind of love can save her? How can she reduce her suffering? She’s willing to do anything. Assisted suicide? Their Mennonite family has had its share of suicides. Their father was assisted to his death by a train on the tracks. Their cousin Lina took her life three years after their father, now seven years ago. “Where does this violence go, if not directly back into our blood and bones?” (271)

“Are Mennonites a depressed people or is it just us? We’ve been here before. Everything is a repeat, another take” (135).

“Canada” plays an integral role in the novel. Yoli’s dream of having Margaret Laurence’s stone angel lying beside her; her father’s love and admiration of Lester B. Pearson; their mother’s love of the Winnipeg Jets; various landmarks in both Winnipeg and Toronto where the story takes place; Elf’s reference to Nellie McClung.

It is a story of life versus death. Life is funny, it’s ridiculous and absurd, and Toews deals with the tragic events with humour and almost entire disclosure. Her biographical novel–tragic and personal though it is–needed to be told because people who cope with mental illness suffer great pain and despair, and sometimes they are not heard and sometimes they become isolated and silent. Toews gives them a voice:

Despite all of these tragedies, when narrator Yoli reminisces, she exposes a tightly knit family, replete with their joys and silliness, and a brave mother who pulled herself together to attend university to study social work, and thereafter to work as a therapist, helping the Mennonite women deal with their problems, paid with sides of beef, chickens and eggs, and other bartered services. Yoli asks how brave must she be? “Well, said my mom, at least as brave as Aleksandr Solzhenitsyn” (249).

Miriam Toews is the author of five previous novels: Summer of My Amazing Luck, A Boy of Good Breeding, A Complicated Kindness (winner of the 2004 Governor General’s Literary Award for Fiction), The Flying Troutmans (winner of the Rogers Writers’ Trust Fiction Prize) and Irma Voth, and one work of non-fiction, Swing Low: A Life. She lives in Toronto.