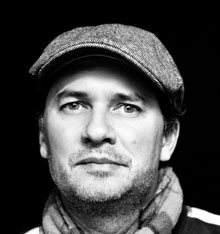 M: What elevates a piece of writing beyond ordinary?

JV: A compelling, authentic narrative voice; brutal truth but restraint in calibrating it throughout the story. Humility. Wisdom. Complete mastery of the world of the story and finding the right way to tell it. The art of knowing what to leave out; the subtlety and the ability to express deep emotional moments without sentimentality, letting the details and characters speak for themselves. A less is more approach.

M: Your characters are beyond ordinary for the circumstances they find themselves in and for the way they react to the violence within themselves and in their environment. How does a character come to you first?

JV: Characters initially come to me from a sense of place, where they came from, where they currently inhabit space and time, and why. Reading Sherwood Anderson, William Faulkner, Flannery O’Connor and Cormac McCarthy, I am interested by how they created fictional, composite worlds from a landscape that left a great impression on them. For these writers, the sense of “my apocryphal country” is one that resonates with me when I think of the Elk Valley, where BULL HEAD is set.

The Elk Valley is a region founded on violence and betrayal against the harsh landscape of the Rocky Mountains. It was cursed in the late 1800s by a First Nations Chief’s wife, a curse that haunted the valley until it was ceremonially removed in the 1960s. Yet, during this time (and since), the valley has been the backdrop for dozens of man-made and natural disaster such as mining explosions, fires, floods, avalanches, murders, bizarre suicide attempts that ended up becoming second degree murders, pine beetle devastation, etc. It is this landscape, this history, this curse that shapes the people of the area, for better or worse – all of which I’m deeply interested in as I map my own Yoknapatawpha County called Bull Head. The fictional and composite version of this landscape will continue to be a strong character in my future work.

M: You are one of the most disciplined writers I know. How do you handle distractions and maintain focus on your work?

JV: I once read a great quote from someone whose name I’ve forgotten that went something like, “We must all suffer one of two things: the pain of discipline or the pain of regret and disappointment.”

Boom! I couldn’t have asked for a more devastating wake up call. By default, I’m someone who requires routine and as such I’ve trained myself to be a morning person. I’ve tried working at other times but I’ve found that the longer I left it in the day, the more likely I would create an excuse for not doing it. Once my work is done in the morning, the rest of the day is gravy.

Marcello Di Cintio is the author of three books of travelogue including Walls: Travels Along the Barricades. Walls won the 2013 Shaugnessy Cohen Prize for Political Writing and the City of Calgary W.O. Mitchell Book Prize. Di Cintio plans to expand an essay about Palestinian literary culture titled Song of the Caged Bird: Words as Resistance in Palestine into a new book. Di Cintio’s magazine writing can be found in publications such as The Walrus, Canadian Geographic, The International New York Times, Condé Nast Traveller and Afar. He is a former writer-in-residence with the Calgary Distinguished Writers Program and the Palestine Writing Workshop, and will be a featured instructor at the 2015 Iceland Writers Workshop.

John Vigna is a graduate of the MFA creative writing program at UBC and alumni of the Iowa Writers’ Workshop. His fiction and non-fiction has appeared in numerous newspapers, magazines and anthologies including Cabin Fever: The Best New Canadian Non-Fiction, The Dalhousie Review, Grain, Event, sub-Terrain, The Antigonish Review, and Exact Fare 2: Stories of Public Transportation.

He is the recipient of the Dave Greber Award for Freelance Writers, winner of the sub-Terrain Lush Triumphant fiction contest and finalist for a Western Magazine Award, the Event creative non-fiction contest, and the CBC literary non-fiction contest. John lives in Vancouver with his wife, the writer Nancy Lee. He is a Lecturer in the UBC Creative Writing Program.