In A Private Mythology, Stephen Morrissey writes poems that are obliquely confessional while delightfully clothed in the subterfuge of metaphor.  The first part includes a series of poems that share the metaphor of a “coat” for guises of the self, and in the second part astrological signs are applied to eons of civilization as they reflect stages in the speaker’s life. In the third part, the poems return more discursively to family and remarriage with his new wife as lover. Here each poem is a at once miscellaneous and a gem while it maintains the feel of the rest of the collection, echoing subjects and motifs from earlier parts in the collection.  Interestingly, the cover design “Chysalis var 2 “created by Ottlie Douglas-Fodor was inspired when that artist attended a launch of one of Morrissey’s chapbooks, and indeed the design is at once apt and playful in its own right.  The figure with a blanket on his back – suggestive of a  mythological icon – works well for this collection, which improvises its own metaphors and accumulating mythologies. Here is a poet who writes simple words using novel figures but in cadences loaded with quiet aural effects that carry their own peculiar power.

In first part, the coat metaphor provides the basis for a series and a powerful start to the collection. From “The poet’s coat” that “gives warmth/ and provides a shadow” (14)  to the speaker’s mother’s mink fur coat that was confined to closets but intended for fun (and that evokes a period of “madness” in the speaker’s life (18), the poet moves to other kinds of “coats,” including my favourite, “The Coat of My Inner Self.” “You are not as tired of this coat / as I am, and yet I wear it/ obsessively,” the speaker begins:

I am well-covered
in the rags of my complexes,
a wraith of the streets and shadows
in a coat that I have worn since birth. (21)

From the Freudian suggestion of “complexes” in these lines, Morrissey mixes seriousness with an iota of the mundane while he goes on to remark how it is“stained hamburgers /and French Fries” and about how “threadbare” the coat and how it “cannot keep out the cold (Ibid.).” There is a self-irony and humour to this poem with its smooth eliding lines that draws the reader right in.

Similarly, I am drawn by the mythopoeic “Visits from Psyche,” with its dramatisation of a dream in psychological terms. Having the trappings of a real girl, Psyche drives a volkswagen through puddles, and when the dreaming speaker complains that the car might stall with the water spray, she throws the keys in his face, and they hit his glasses, blinding him.  Even as the rest of the poem unravels the speaker’s interpretation of the dream for the reader (in perhaps less satisfying terms), we are offered verses with the suggestion of a quip:

and the key to open a lock,
a mystery to which I was blind,
even wearing glasses. (26)

Significantly, the second part of the poem offers images of pain and guilt, of being oppressed and of suffering. From the injured kangaroo in the dream (that must be returned to a backyard containing a bear) to the wounded horse with the reproachful eye that watches the speaker (in the manner of the injured horse in Robert Browning’s “Childe Harolde to a Darke Tower Came”), we are allowed a glimpse into the speaker’s anguish in the complexity of his emotions.

In the second part, Morrissey applies astrological signs to the various eons of civilization as they provide a macro-metaphor for something like the stages of a man’s life. From the beginning “Age of Virgo ( 13,000 to 10,800 B. C.), which is seen as “the time /of silence, of/  the soul’s gestation,” to the “Age of Leo” (1,0800 – 8,640 B. C.), in which the lion “is born in the heart” and “walks at night/ enters dreams (38),” we perhaps see a movement from an uneventful childhood to a period of becoming and passion at adulthood; but while the “Age of Cancer” talks about caves that are both places of gestation and death, the “Age of Gemini” echoes a middle-agedness in the manner of Rip Van Winkle that is hard to mistake and brilliantly concise:

I fell asleep
and woke at middle age,
so many years spent
in deepening sleep
until released (42).

From the pleasing ring of these lines, we move to the “Age of Taurus” in which the Minotaur-like figure acquires power while his hanging genitals appear as “the shadow/of one in the moonlight/ of one/ whose body was a man’s “(43). The poet remarks on our commonality as humans in these terms:“we each/ have one song/ one chorus/repeating/our need for love (Ibid.).” The dramatization of the remaining ages with their intricate iconography moves into the broader arena while the present implies a history on which it is built.

The third section shares the confessional nature of the first section but is written more discursively. Here the speaker has found love in a new marriage, and both the poems “For My Love” and “Anniversary” are lyrical and touching. In the former, the speaker sees a picture of his wife as a young women when he did not know her, and feels that it is infidelity to love a twenty year old (even if it is his own wife when she was younger) since he has fallen in love with her when she was much older. “Anniversary” is a song that bursts forth most spontaneously with the lines breaking into new images, each with metaphysical tenuousness joined by one point of similarity, with every turn of line:

A flock
of birds flying south
move as one mind
or a single wing turning in the air,
caught on the wind, swooping,
then turning over like
a page in a book (69).

Later in the poem, the imagery shifts to include a comparison of their love to “honey/ in the hive,” with the beat of wings now around an implied queen bee like a “bird wing (Ibid.).”

Employing a similar metaphysical-type image of a “thread” for “memory” in “Hanging by a thread” (the last poem in the collection), Morrissey uses the metaphor to suggest the precariousness of family as it is held together by the single thread of memory from a shared past.

And then the thread
breaks making the sound
of grief & disappointment,
oh brother, son, father,
& mother, former families
we said we loved,
and into the darkness
we fall, as though our past
never existed (87).

Most powerfully, the poem closes with clanging, abstract tableau of “oh broken strings,/ twanging instrument,/ banging drums & a bird somewhere/ out there among the damned (Ibid.). 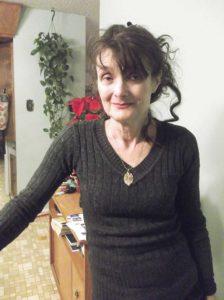 gillian harding-russell is a poet and writer from Saskatchewan. She holds a Ph.D. from the University of Saskatchewan, and wrote her dissertation on postmodern Canadian Poetry. For may years she was poetry editor for Event, and was a regular reviewer for Prairie Fire Online Review of Books. She has three poetry books and several chapbooks published.  Poems have recently come out in the anthologies I Found It At The Movies, ed. Ruth Roach Pierson (Guernica, 2014) and Between the Lines, eds. Dwayne Brenna and Lacey Thiessen (University of Saskatchewan Press, 2014). More work is forthcoming in Descant, The Antigonish Review, Fieldstone and Freefall. The long poem “Missions: Then and Now” was a finalist for the Thomas Morton Award, and will be published in The Puritan, Issue 27 (Fall 2014) .