Book Review of “What Echo Heard” by Gordon Sombrowski 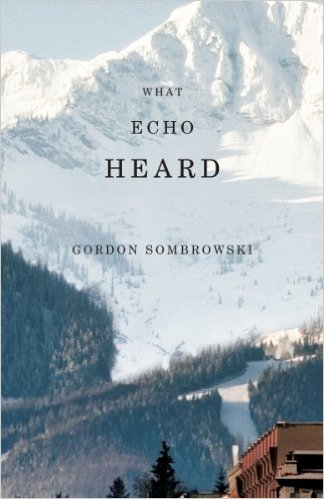 Rea Tarvydas
a review of

This debut collection of linked short stories illuminates the social stratification of the small, working-class town of Fernie, BC and takes readers back to an earlier time: when timber and mining companies ruled a community cut in half by the railway tracks; when miners, loggers and tradesmen worked long, sometimes dangerous hours to provide for their families; when the church both cradled and towered above its people.

The title is derived from the myth ‘Echo and Narcissus’.

Although the stories feature a number of marginalized characters, the mountains that surround the town form another character for consideration. Their power is evident throughout: “[s]he had never seen mountains before, and she marveled that something could go so high into the air. She felt sure the mountains must keep the sky from falling down” (22). Their menace, too: “[h]e looked out his window where he could see Mount Fernie looming over the town, its snowy scalloped escarp lie a leering row of teeth taunting him to set right the injustice” (115-16). The natural environment is recognized throughout these stories.

The power of the mountains takes place alongside one of Sombrowski’s greatest strengths as a prose writer: his ability to occupy different perspectives of the immigrant experience. Sombrowski adopts the voice of a young girl who, together with her parents, works hard to create a new life in Canada. In “Maria Assunta’s Miracles”, the Italian-Canadian girl shops for groceries because she speaks better English than her parents (49). Maria skirts the periphery, travels by alleys and back roads in order to escape. “Sometimes when she was riding her bike she would repeat the name Hiawatha, Hiawatha, Hiawatha on each down stroke of the pedal. Riding her bike felt like flying” (48). Detail and rhythm evoke childhood, and provide a real point of connection.

Another example of Sombrowski’s ability to create compelling narrators occurs in his explorations of loss. In “Mittens”, a young German-Canadian girl faces racist barbs from her kindergarten teacher until they realize they share a common wartime experience. In “The Baker’s Wife” a young man, barely out of school, begins to understand the complexity of death as the mother of his dead schoolmate comforts him. “We sat huddled around the breakfast table, none of us sure of what to say to the other. We had the embarrassed faces of those who do not know where to look because wherever we looked we saw death” (204). These are meaningful stories.

And there is humour. The political stakes are high in “The Power Behind the Throne” when a dinner party disaster, “the bunning of the beehive” (130), wreaks havoc on the Board of Trade. A misguided hunting decision leaves two friends open to a charging grizzly, with comic and frightening results in “Survival of the Fittest”. These stories are the stuff of legends.

There is an erotic tone to Sombrowski’s writing. In “Maria Assunta’s Miracles” a devout Catholic young woman experiences a religious and sexual awakening on the banks of the river. “Afterwards she would never recall whether the figure had come from the sky or from the forest, although she clearly recalled the woman” (52). Ultimately Maria is awakened to the possibility of pleasure. There is also a romantic tone to the stories. In “Silence” two young men explore and come to understand a shared sexuality. “Their love had made them chaste. They seemed to know that the time was not right for there to be more” (175). This is simple and beautiful writing.

In particular, the outdoor scenes burst with sensory details. “The diesel fumes gave way to forest air that rushed into his nostrils: a medley of scents: pine and cedar, rot, dirt, turpentine and the sweat of sage and lavender that reminded him of his grandmother…he saw a blur of light and shadow, and greens of emerald, grass, hunter and black, grey and brown” (18). The language is sensuous and tactile.

The back cover of What Echo Heard states these stories are written “in the tradition of fables, tales and yarns”. This is true. Both the formality of Sombrowski’s language and sentence structure suit the traditional narrative. Most stories are told in a third-person point of view and are omniscient. This creates a sensation of circling above the town like a hawk on a current. Although the aerial distance emphasizes both the physical and social boundaries of the town and it’s people, the overall effect of omniscient drift is that the reader is left wanting.

Sombrowski’s fundamental strengths of creating characters and sensuous, detailed language are softened by the omniscient drift of these stories. Just as I got to know a character, the omniscient story shifted to another perspective. I wanted to hold onto the characters for longer periods, create stronger connections. I wanted more.

What Echo Heard is a solid debut collection of short stories and well worth reading. I look forward to Sombrowski’s next book because if he plays to his strength at creating compelling characters, his writing should only keep getting better.