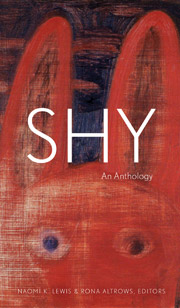 “If you don’t know what you’re talking about, keep your mouth shut.” “Children should be seen and not heard.” These words from my father force their way out of the dark each time I’m placed in an unfamiliar situation. I am an introvert by all senses of the word: shy, hesitant. But most disagree with a laugh or a hearty guffaw, “You’re not shy.”

Why? Because I appear outgoing? Because I can generally talk to people? You don’t pin shyness to your shirt for everyone to see. But maybe I’m missing something, some sure definition of what it really means to be shy.

The answer comes in the form of Shy: An Anthology (University of Alberta Press, 2013) edited by Naomi K. Lewis and Rona Altrows. Maybe somewhere within these pages I would discover where I teeter on the so-called shyness spectrum.
What I’ve learned from the variety of pieces showcased in this anthology is that the spectrum is wide. In fact, it’s not really a spectrum at all. It’s more like the Alberta foothills, rolling mounds of thoughts and experiences. Each one a little different, but similar in the way it makes you feel.

How many have been unable to say what they really want to say, the words lost somewhere between the brain and lips.
“It huddles in the lungs and won’t come out.” (Page 1, Sometimes a Voice, Don McKay)

“Don’t speak. Stay hidden and withhold all word of your thoughts, your dreams.” (Page 2, Silentium, Steven Heighton)
No matter how much we try, often we don’t want to be seen. No matter how exciting or fun the situation presents, some huddle in the corner, resisting the temptation to let go. To be vulnerable.

As in Elaine Woo’s poem, “I Couldn’t Reveal,” a young girl is in her sister’s room, the catchy rhythm of The Beatles, beatling from the record player, and even though every inch of her body wants to break loose, she resists, not wanting to show that other side of her.

Sometimes circumstances force us to withdraw. Like the child being tucked away into an orphanage in Wayman Chan’s, “that animal.”

For me, when I would speak up, I would say something I would later think was ridiculous. I’d play over in my head all the things I should have said. Those things that seemed smarter in retrospect.

Shy can be a hot flush through your body, tying your stomach in knots until you can’t think clearly, the dizziness threatening to kick the legs out from under you, or a shadow in the corner of a crowded room, praying, hoping for the light to forget it’s there.

For some, Shy won’t leave the comfort of home while the family is out enjoying life and with it comes the nagging fear that you’re not good enough to maintain a healthy relationship.

Like in Russell Wangersky’s, Shy – 10 Ways: “Her cats won’t leave the doormat, and I know they’re afraid she isn’t coming back. I know because I’m afraid of exactly the same thing.” (106)

This anthology has something of everything. It’s an in-depth examination of all facets of shy. And the ultimate answer is that shy is different for everyone. We can wobble on the edge of shy, think we’re okay for awhile and then when we least expect it, shy claws it’s way to the surface. From the first page to the last, I would bet, upon reading this fabulous collection, everyone will discover a little of themselves in every piece.

And if nothing else, it’s worth the read because the submissions are strong, the writing full of emotion…and…”Shy: An Anthology” picked up the silver medal at the Independent Publishers (IPPY) Awards in New York this June.