Book Review of “Memoir of a Good Death” by Anne Sorbie 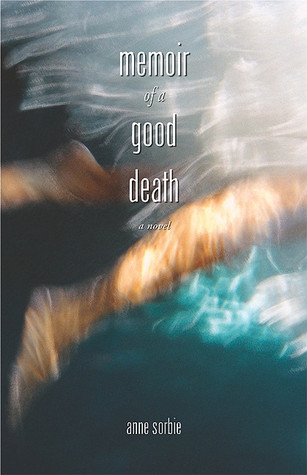 Anne Sorbie’s novel is of duality and contrasts, of landscape—both land and water; of the natural world, both beautifully breathtaking, and so ferocious, it takes one’s breath away; of death and living; of grieving and celebrating; of holding on and letting go. It is told by two narrators, one dead, the other, an unlikely survivor. Rhegan and Sarah Flett, daughter and mother, describe their attachment to Ed, recently deceased father and husband. Perhaps each woman needs her own narrative because neither is able to communicate effectively with the other.

Both women loved Ed, and each jealously guarded her particular attachment to him. As Sarah goes through Ed’s personal items, deciding what to do with his clothes etc., Rhegan asks for an item of his, a white shirt. Sarah does not consider this request; instead she flaunts the shirt by wearing it tied in front at the waist. Later, Sarah is surprised when Rhegan shows up at Ed’s interment wearing his Macintosh. It’s this tug of war dynamic that drives the story. On page 79 Rhegan says, “I struggled to have a whole conversation with Sarah, but we always got off track”, and on page 83, “I was attempting to get close to her but she was still distant.”

My father’s family came from Orkney where my great-grandmother’s great-grandmother had lived with a bear. The animal was a gift, given to her by the Norseman who stayed in her croft for ten years avoiding war. During that
time, my ancestral grandmother gave birth to a daughter. Her contemporaries assumed the obvious, but somewhere in the gap that exists between legend and life is a family trait that hints otherwise: my father, Ed, had vertical ridges on his tongue. His mother passed them on to him, and he gave them to me (9).

Mathea Flett, the daughter of my ancestral grandmother Gudrin, moved to the Scottish mainland from Orkney after the old bear mauled her mother to death eight centuries before I was born. After that, Mathea’s land passed from mother to daughter – until my granny gave birth to Ed (36).

Rhegan bought and sold properties located along the Bow River. She was also the owner of several properties in this area, and collected rent for those she did not occupy herself. Autonomy was important to Rhegan. So was hanging on to the tormented feelings of love and passion for her second husband Liam Richards who sent her packing following a certain disclosure Sarah made to him regarding the roadtrip she and Rhegan took to Kalispell a few months before the wedding.

My mother, strange as it may seem, kept the details of our trip to herself – until a week after my wedding at Assiniboine Lodge. . . . In a moment of what she called clarity, she told Liam about Kalispell. To me, she said that our relationship, if it was to last, should be based on honesty. For the next nine years, I rarely spent time with my
mother, and hardly spoke to her until Ed died (45).

Sarah had been married to Ed for 43 years, and she and Ed never owned property. Although she was petite, she was capable, capable enough to share the arduous tasks associated with paddling a canoe on the Bow River with her daughter in an adventure, one of letting go. Sarah would disburse Ed’s ashes into the river. She had divided him into five baggies, her way of containing him, described in Rhegan’s black humour narrative as “man-in-a-sack” (156). “Finally, you understand. Your father did the same thing to me all those years” (157).

Rhegan took an unassembled box kite that she and Ed worked on when she was a Brownie. And she took a headpiece, a missal, a veil, garters–a variety of wedding paraphenalia from her marriages to Dominic, Jack, Raj, Lynn, and Thomas. She and Sarah and friend Nemit and her nine-year old son Adam had played with these items before the trip on the river, and Sarah fussed over Rhegan’s collection of wedding rings.

There was something that I held on to, one set of wedding paraphernalia that I didn’t store in the wardrobe or let anyone else try on, that I hadn’t included in my selection of disposable belongs. It was the dress that I’d worn for my wedding at Assiniboine Lodge. I stored it in the basement as if that would help me to keep my feelings about Liam underground (162).

Of Liam’s, she took “one sixteen-inch chain and a small oval Saint Christopher medallion in twenty-four-carat gold intended to protect the traveller” (221). She wore it around her neck under her wet suit.

Anne Sorbie knows Calgary well, and especially the areas in the vicinity of the Bow River. She mentions Kensington where she has dinner with ex-husband Jack at the Muse bistro at 10A Street that runs perpendicular to the river. Almost as an aside, she names Osteria de Medici restaurant where she once took prospective buyers. And further west, in Parkdale, she speaks of Saint Bernard Catholic Church where she attends Sunday Mass with Sarah, where they whisper behind their missals, where she can finally tell Sarah the details of the errant diamond ring that Jack gave her.

Still, while the complicated relationship unfolds between Rhegan and Sarah, the reader is reminded, chapter after chapter, of the hazards of the natural world. Beyond the logistics of preparing for a river adventure in a canoe, capable though these women may be, a larger force threatens to wreak havoc with their lives.

When I finished reading Anne Sorbie’s Memoir of a Good Death, I sighed. I turned the novel over in my hands, fanned the pages and came back to the epigram: “[w]e made our speech from moving water/a sound that seems to ache”
– Al Purdy, “In the Beginning was the Word”.

This was a most satisfying read. Thank you Anne Sorbie. I echo Robert Kroetsch’s remarks found on the back cover: “When the dead speak we must listen. Anne Sorbie’s dead and eloquent narrator is full of wild humour, pain, rebellion, compassion, wisdom. And she tells a wickedly good story.”