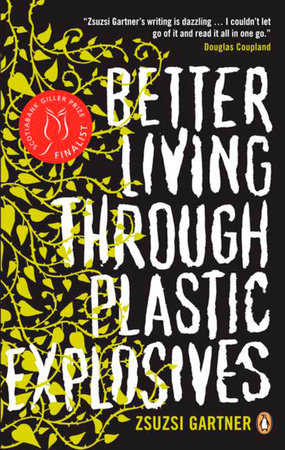 Zsuzsi Gartner’s second short story collection, Better Living Through Plastic Explosives, is edgy, modern, ingeniously full of cutting edge pop culture and technology references and still manages to be Canadian. It’s no wonder this collection was a Giller finalist. Gartner turns our Twitter-driven, social-media-centric, cell-phone-obsessed existence into a mirror that reminds us that human hearts beat under the humming miasma of all our gadgets. Her stories caution us how easily we can be overwhelmed by the bizarre extremes of the cutting edge world we take for granted. Gartner’s writing is astute, precise and evocative.

Most of Gartner’s characters have been pushed to the edge, to breakdowns and beyond, by the incongruence they experience when the reality of their frantic, youth-obsessed world conflicts with their ideals and beliefs. There’s Nina in “Investment Results May Vary”, doing community service as a sweat saturated Olympic mascot, because she turned a leaf blower on its owner when she became enraged by the noise:

The woman stood there, impossibly wide-eyed… an anime character, as Nina screamed about carcinogens and decibel levels… wielding the leaf blower like an AK-47… this was the moment [Nina] understood how something like Columbine could happen. (77)

This is where a lifelong commitment to battling environmental degradation led her.

In “Once We Were Swedes”, journalism instructor Alex struggles to muster enthusiasm to teach her apathetic class, “wounded children of the new diaspora with their burnt offerings of exploding car radiators and near rapes in strip mall ATM lobbies as excuses.” (26) Alex remembers when she and her husband Rufus were young and spoke IKEA to each other, “lingonberry of another tongue”… when they “used to be happy!” (28) Now Alex is facing premature menopause, her “uterus a dried gourd inside her, rattling like a maraca” (26) while the “prematurely aged homeless” (29) around her look younger thanks to a provincial health insurance initiative covering “botox injections and teeth-whitening technology for the disenfranchised.” (28)

Teeth and surgically enhanced body parts appear prominently in several of the stories in the collection: metaphors for the increasingly plastic extremes people are willing to risk to hold on to their youth, to conform to a bizarre ideal. Gartner’s homeless heroin addicts are “ageless Fireball XL5 puppet people…expressionless…teeth gleaming like Chicklets between pillowy Jolie Lips™.” (28) In “Investment Results May Vary”, Nina sees the same two people everywhere, Dan and Patricia, their teeth “preternaturally white, boraxed incisors gleaming” (63) as the couple spreads “like toxic mold” (63) to billboards and bus ads. Nina, in contrast, burdened by her “childhood of pork fat… and polyester stretch pants,” (67) snaps and kidnaps a small boy who she believes is Dan and Patricia’s son.

There is a cohesive theme to the collection: a sadness, a sense of loss and defeat amongst the characters living in a Vancouver exaggerated and pushed to bizarre extremes to show the reader how strange the reality of our existence truly is. Many of Gartner’s characters are disillusioned, middle-agers who realize they’ve become old but have never grown up. They watch their children with the wistful realization that life never got better than it was at seven or eight.

The book is named for the final story in the collection, the story of a recovering terrorist, a woman who is haunted because she accidently killed a child when she was young, idealistic, and trying to stop “the owner of a company that exported chlorine-filled diapers.” (73) She now lives with her husband and Pokemon-obsessed son, gardening, attending a recovering terrorist support group and worrying about the reckless drivers on her street. Gartner sub-titles sections of her last story with the names of Pokemon attacks like Gunk Shot, Wake-Up Slap and Lava Plume. Here is another character unable to recover from what happened in her youth and destined to crash and burn, condemned “to fret about the future or chew on the bones of the past” while she wonders if she has a soul.
One of my favorite stories in the collection, “Floating Like A Goat”, is a letter written by a mother to her daughter’s teacher, Miss Subramanium, pointing out the absurdity of teaching creativity by forcing children to conform to a rigid set of rules where “six-year-old children [must] draw people or animals [whose] feet MUST be touching the ground.” (54) The narrator shows her daughter Chagall’s paintings: “Georgia was most taken with the goats—floating, soaring, violin-playing goats” (55) and wonders if we’d be able to buy Chagall prints online today “if daydreamy little Marc Chagall had been in your grade one class, Miss Subramanium?” (55) She points out that “Art…is perhaps the only human activity where not meeting expectations corresponds with success, not failure.” (57) Like the other stories in the collection, this one too is bittersweet as the mother’s letter becomes a reflection on her own life, her disappointments and compromises that start when she falls in love in college:
To be an artist or a muse—that was what tore her in two. The spell she was under led her to believe being his muse would be the most fulfilling of the two…[her] umbral masterpiece hangs above the bidet, to [her] husband’s discomfort, a reminder of how much has been lost and how much has been gained and of the almost incalculable distance between the two things.

Some of the stories in the collection such as “Summer of the Flesh Eater”, “The Adopted Chinese Daughters’ Rebellion”, “Someone Is Killing the Great Motivational Speakers of Amerika” and “We Come In Peace” have many characters and require careful attention on the reader’s part to keep all the characters straight. Gartner includes a character chart for “We Come In Peace” and footnotes in the motivational speaker story. These stories are written from a distanced point of view; a detached, emotionless narrator effectively casts the reader as an observer, watching over a neighborhood of characters. The stories are dark, extreme and sharply satiric but lack the emotional involvement of the other stories in the collection. They are provocative social commentaries, effective because the detached point of view simply asks us to “see” without pointing fingers. They are an interesting contrast to the more character driven stories in the collection.

Better Living Through Plastic Explosives is intelligent, laugh-out-loud funny, and thought-provoking. It’s peppered with an astonishing number of precise pop culture references from Citizen Kane, Hummers and MAC lipstick to a subtle tongue-in-cheek nod at the Twilight series. Gartner writes with such clarity and accuracy that she doesn’t need to explain her references, though the glossary of Ikea terms is delightful. This is a collection of stories that represents the future of Canadian fiction. Gartner’s use of language is complex and awe-inspiring; it’s true to the definition of art Gartner postulates in her own story, both unexpected and successful. Just be careful if you plan on reading it while you travel: it’s an adventure taking this book through security at the airport.