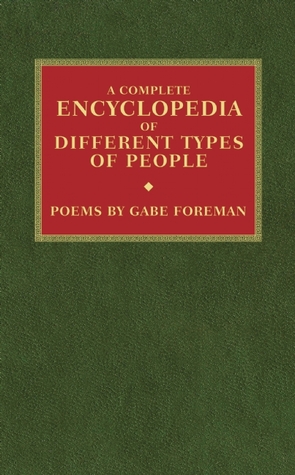 Barbara L. Black
A review of
A Complete Encyclopedia of
Different Types of People
By Gabe Foreman

It’s a beautiful con from the moment you see the cover: a green faux leather front with the title, A Complete Encyclopedia of Different Types of People, set in a carmine-coloured box with Greek motif border. It suggests a certain pedigree, something serious and comprehensive, a factual, considered and objective rendering of humanity. But lurking inside is a riotously incomplete, wildly idiosyncratic and at times elusive sampling of humanity. Enter here.

It’s a daring undertaking, sometimes cryptic, other times hilarious, even touching. But Foreman takes a risk and invites the reader along with him as he ventures outside the boundaries of the ordinary. It’s really the opposite of an encyclopedia, which knits facts neatly into a precise yet general summation. Foreman tackles his human subjects by pulling out all the threads and recrafting a curious, poetic vignette using narrative, prose, dramatic dialogue and numerous other forms and techniques. This approach yields poems that are refreshingly original, funny, and just plain strange. In the absurd “Lexicographers,” a boy follows his ghoul to the altar (get the joke?) of the Oracle where his flesh is stamped with text. “Day Traders,” which corrupts text from an insect guide, has stockbrokers “emerge in large numbers from lakes and streams.” Mayflies, pheasants, ghouls, oracles and boomerangs weave in and out of the self-referential narrative. There is a sense of whimsy in stretching the limits of poetic association.

But many of the poems are also mildly subversive. For example, “Boy Scouts,” takes an ironic stance to the whole scouting enterprise and fuses poetic references to Frost and Tennyson with a bit of verbal clang:

Follow the high road, take the low.
What can it matter? When your card
is dealt, some jerk in a stiff smock
will hammer your coffin lid shut. Hell,

as far as time can tell, our names
get scratched into planks and planted
in a willow’s shade to weather
forever, as though we were saints—

not deadbeats on shoulderless roads.
Come. Saddle up. Let’s scoot.
For we have miles to ride
before we sleep

Hapless scouts scooting on “shoulderless roads” in a falsely bucolic landscape. Heaven is not the “holy” Tennyson one, but a more contemporary one that’s “dark as hell.” Beneath the simplicity and beguiling rhyme is a carefully measured sardonic tone.

Foreman’s modus operandi puts one in mind of the surrealists: he severs a thing from its old tired context and reimagines it, often in a post-modernist setting. A kind of semantic entanglement occurs, creating an entirely new context.

Titles are not always a dead giveaway for the content that follows. In “Only Children” Foreman recasts a mythic tale (the Oracle again) in quatrains—only vaguely illustrating the title’s category—and turns the tables on a homesteading Greek deity who lives “In a grove like a temple of poplar trunks.” In the last stanza :

… a pampered misfit taps her door.
His mask: a stag’s heart.
With a log in her woodstove exploding,
He says, ‘I am the Hart of Foreboding.’ (56)

It sounds jokey and rhymey, and yet, it still manages to uproot our expectations. Is the Oracle being visited herself by an oracle? Is he offering his heart? Are they both lonely-only misfits? It’s funny, yet ultimately unsettling. It works. But the danger of Foreman’s occasional goofiness is that sometimes the word play or punch line in a poem sucks the life out of the content. On the other hand, the phony diagrams, one-liners, word puzzles, and absurd questionnaires scattered throughout the book are great bits o’ fun: “Blind Dates: See Optimists.”

Lest I have led you to believe that all this experimentation yields only light-hearted poems, let me turn to some of the more abstruse and sober experiments. On occasion, Foreman takes us deep into the woods and leaves us there, as in this excerpt from the poem entitled “Sweethearts”:

Barbara, I glow through an unreal hole.
My crimson pants are torn by thorns. Oh, world
(in my thong I’m a tubular stud riding ten miles into Compton).
With pissed-off cronies in tow, I sniff loose cocoons
on sideroad grasses. I hang tiny pupae on photons and let fly.
Shiny little moths pursue bear cubs to the stream,
as flies in a hot summer parking lot
swarm the chocolate.(76)

This quasi-apostrophe fried my logic circuits entirely. But should we fault Foreman for the occasional puzzler when he is such an intrepid hunter after the destabilizing and fresh original? Amid such trained recklessness there are bound to be a few train wrecks. But there are also surprisingly poignant poems that eschew humour to take us from a hackneyed world into a strange new place we had never contemplated. Consider the haunting poem “Transplant Survivors” (and its “twin poem” “Organ Donors” which shares the same last two lines). It concerns a “girl with a pair of pickled eyes” who “gets fresh ones”:

…the girl spots her
donor’s face. And tugging at the sockets
of his tarnished, hollow gaze, two gulls.
The girl screams. A passing nurse
pages the doctor, who reassures the mother
such fabulous dreams (‘a common side effect
of morphine‘) will pass as Kim recovers.
Pillow-propped, crowded by animals,
the patient turns her blindfold stare
from parking lot to doctor:
‘Each better place is next to nothing,’ she said.
‘The difference is both hard and clear.’ (79)

This collection contains gems that are hard to fathom (but worth it), and others that ring clear on the first read. Many of them jangle and resonate long after a reading. As you make your way through the Complete Encyclopedia it feels like Foreman is slowly and deliciously trepanning into your brain in order to expel the habituated humors and install his own private and eclectic facets of reality.