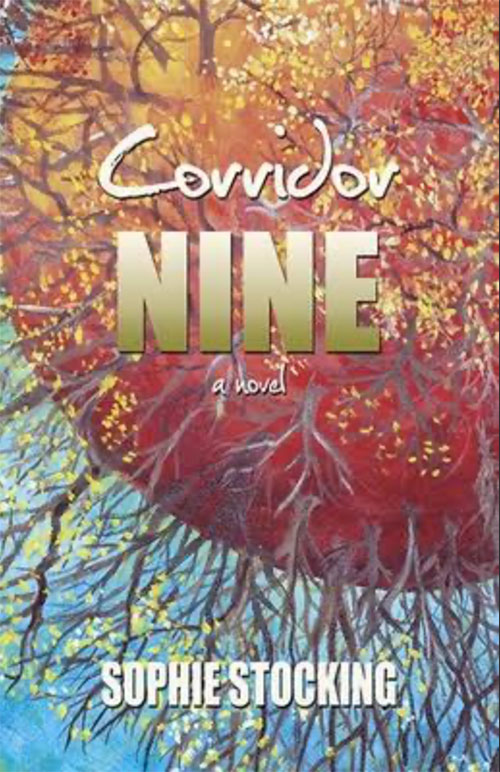 Sophie Stocking’s Corridor Nine is a story of life, death, family, and rebirth. To begin, the novel places a reader in a disorienting space. Questions I asked myself included: where am I? What are these people? Why does this three-year old’s body (Fabian) have a large penis, and why do I have to imagine this? The structure of the novel does not immediately alleviate the confusion, as two storylines weave and intersect throughout. The story of Bernie is grounded in reality—recognizable to any Calgarian especially—while the other plotline follows the afterlife of her father, Fabian. These two storylines twirl around one another to slowly reveal more and more about the past, and the characters themselves in a well-orchestrated manner. However, due to the jumps from scene to scene and place to place, dialogue can be confusing, as exemplified on page 173 where there are several lines of dialogue before it becomes clear that Bernie is talking to her husband.

I was wary at first of the narrator introducing all four of Bernie’s children, but the four of them are all well-developed and serve a purpose in the story, especially the seemingly moody and distant teenager, Eben, and the too-eager-to-be-an-adult, Lola. One character that left me wanting more development was Bernie’s husband, Peter. Although he is a fairly major part of several scenes and the novel as a whole, his main function seems to be a voice of exposition for Bernie, often talking about her past with her father and children. However, I felt Peter as a character himself was distilled to someone who is bad at making food for the kids and worked a lot—nothing more and nothing less. I also would have liked to see more of Bernie’s artistry. The novel mentions her studio and some artistic endeavors throughout the novel, but it is not until the very end that we see Bernie produce art in detail. Even mentioning art she did that the family had around the house would have satisfied, but the lack just left me wanting more. Other than that, Bernie is a fun character to follow, and I was always rooting for her.

The storyline that follows Bernie is very much grounded in Calgary. Road names such as Crowchild and Shaganappi helped me imagine the scenes vividly. Even the weather was very Calgarian, as the narrator describes how the weather would “feel like summer” by midday on one page, only to have the year’s first snowfall come nine pages later. As someone who has lived in Calgary their whole life, this was not too distracting for me, but even I have a note or two in a couple margins where I ask: “what season is it?” The weather and place names would be familiar for people in Calgary, and it would help draw in that readership. I am unsure how these factors of setting would affect someone who is not familiar with the city and its rhythms, however, and I fear they may be alienating.

Overall, the book was quite an enjoyable read. The seriousness of Fabian’s relationship with Bernie, as well as his death, is paired nicely with some well-timed humour to ground the reader in something less grim. Bernie’s life as a wife and mother are also engaging, and while she gets a tad manic and stressed at times (perhaps ‘a tad’ is an understatement), she is always relatable, and the humour of certain scenes helped me to stay interested, involved, and invested in her story.

Skylar Kay is a recent Mount Royal graduate with a degree in English. She is interested in haiku and plans to pursue an M.A in Japanese Literature. She is a prose editor for FreeFall Magazine.