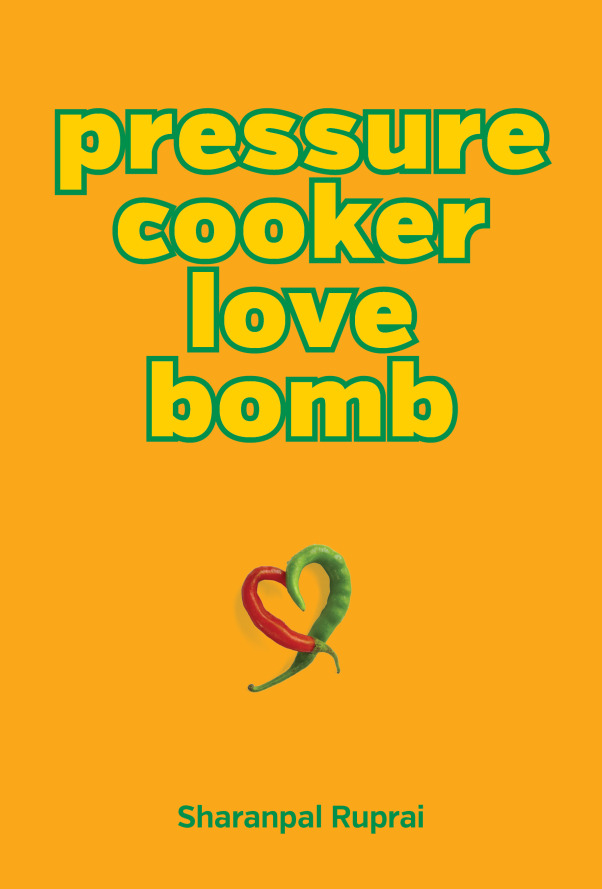 Sex, love and food: the lyricism

The Instant Pot is all the rage right now, but what, exactly, is a ‘Pressure Cooker Love Bomb’?

Sharanpal Ruprai’s second book of poetry, Pressure Cooker Love Bomb, holds the answers. A lyrical, poetic dive into family expectations, arranged marriage, queer love, interracial relationships, and yes, cooking, it explores all the ways that a twenty-first century Sikh woman might find love on the prairies, might keep warm, might keep alive, and might write her own happy ending.

Her minimalist word choices belie the impact of precisely chosen words. One rule for cooking offers “take up your rolling pin, yes / the one your mother beat you with” (13). Whole narratives waft out from those words; the weight of love, the weight of trauma. How the same object can be used to hurt and feed us; how this makes us cherish its weight and heft.

Many of the poems offer short vignettes into South Asian life in
a predominantly white culture, sweetness and pain evoked in a matter- of-fact style. The poem “bride in a bag” (37) tells the story of a wife who must escape an abusive arranged marriage with help from her parents. In the next poem, “round-two: a bride-in-a-suitcase / #ready for the next marriage,” (38) the woman is back home, remarried, a successful “auntyji that match-makes.” Ruprai’s poems throughout the book offer possibilities for what love might look like beyond the confines of the standard cis heteronormative rom-com: two young girls explore blossoming sexuality together, two strangers challenge a racist security guard at the airport, two queer couples meet on the street and take up space in the middle of the road, leaving “a little glitter rainbow trail behind them” (49).

After a series of #marriagerules poems, the narrator writes a #newrules poem, deciding that perhaps the answer is:

And, of course, there are plenty of rules for a Canadian Punjab Sikh about what classes, castes, and races one may or may not marry, “nobody said anything about gender” (31). Ruprai kicks back, fiercely, but again with compassion, against the hate that “is stuck in binaries” (33). Sex with a woman lover so sweet, “she said i taste like cardamom and peaches” (40). Sometimes a pressure cooker makes the best dishes.

Nikki Reimer (she/her) is a carbon-based life form of Ukrainian and Russian Mennonite descent currently residing on the traditional territories of the people of the Treaty 7 region in Southern Alberta. A former member of the Kootenay School of Writing collective, Reimer writes poetry, essays and criticism, yells on the internet, and makes digital art. She is the author of My Heart is a Rose Manhattan (Talonbooks 2019), DOWNVERSE (Talonbooks 2014), and [sic] (Frontenac House 2010), which was shortlisted for the Gerald Lampert Memorial Award.