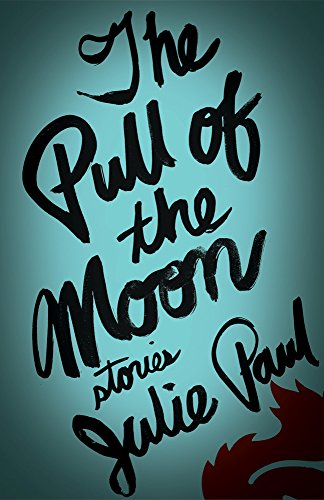 Julienne Isaacs
A review of

The Pull of the Moon, Paul’s second collection after 2008’s The Jealousy Bone, brings together new versions of stories previously published in PRISM International (“Squirrel People”), Little Fiction (“Damage”), and several other literary magazines including The Dalhousie Review and The New Quarterly. Paul has a perfect pedigree when it comes to Canada’s literary milieu, and the stories in Moon benefit from her experience—they are almost without exception edited down to brass tacks, the grit that made one reviewer warn readers, “Danger: High Voltage.”

In a way, Paul’s style—conversational, businesslike—is perfectly suited to short fiction. The best short stories are those that waste no time on pleasantries but draw the reader deep into immediate connections. The stories in Moon bypass lyricism or long descriptions in their direct route to the heart of the matter.

In “Black Forest,” the recently-separated father of eleven-year-old Jenny must balance the burden of parenting alone against the possibility of losing the eccentric Jenny to his ex’s custody. “Damage” takes the reader into the daily minutia of a man unable to work following a traumatic accident. The chilling “Her Full Name Was Beatrice,” previously published in Event 22.2, analyzes the death of a child in a backwards timeline. Another single dad, the lonely Andrew, must decide whether or not he deserves the attentions of an attractive single mother in “Weeping Camperdown.”

Paul’s modus operandi—to-the-point conversations, character-driven observations—is deceptive: it suggests foregone conclusions. But more often than not, the characters in Moon muddle along uncertainly, the answers out of reach to them, if increasingly apparent to the reader. In “Squirrel People,” Dylan and Jess, parents of the 3-year-old Lulu, have lost the spark in their marriage: “He and Jess had met when both of them still possessed a certain quality—courage, maybe, a level of risk-taking—that was gone” (174).

Now, tied down to daily rituals—constantly washing the dishes, shutting out the neighbours’ rowdy fighting and lovemaking in every way possible—Dylan sees himself, through Jess’ eyes, as “big, and sloppy, and needy. A thing to be endured” (174). Whatever pleasures he might derive from voyeuristically absorbing the ongoing drama in his neighbours’ downstairs apartment are quickly stoppered in an effort to keep his home life peaceful. Dylan predictably assumes there must be something he can bring into his family life that will glue it back together—the answers must be external. The family, he finally realizes, needs a pet.

Jess’ negative reaction to the furry newcomer is blurred in the story’s final pages, when Paul pulls back from the scene to summarize its outcome. The move reinforces the story’s emphasis on disconnection, but it sacrifices immediacy, the human details, revealed even in arguments, that make people desirable.

For all her directness, Paul occasionally misses opportunities to delve below the surface-level ironies of her protagonists’ messy lives. The symbols in “Crossing Over”—pets, again—come dangerously close to feeling obvious, as when Roy, retired and golf-obsessed, transposes grief over his recently-deceased wife Marjorie into the death of a cat. A similar problem plagues the whimsical “Pilgrim,” in which an angel-obsessed woman assumes her flesh-and-blood boyfriend, despite the brightness of his aura, is only a way-station in her ethereal spiritual journey.

Stories that deal directly with messy sexual politics (“Tropical Dreams,” “Viable”) are much more effective: sexual desire can be symbolized, but Paul plays it straight, and the result is satisfyingly disturbing.

Overall, Paul’s voice is a strong one, and her characters a worthy study. Add to this The Pull of the Moon’s surprising cohesion, its weave of both obvious and deeply buried repeating themes and images, and the result is a collection worth noting.

Julienne Isaacs is a Winnipeg writer and reviewer. She is books editor for Rhubarb magazine and staff writer for The Puritan magazine’s arms-length blog, The Town Crier. Her reviews and essays have appeared in The Winnipeg Review, Whether magazine, CV2 magazine, The Globe & Mail and The Rusty Toque.