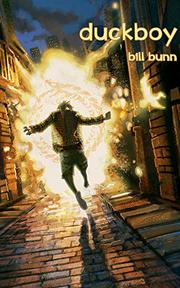 Duck Boy is a novel filled with symbolism and Alchemy. The first symbol, “Duck”, is in the title and represents both the derogatory Webster’s dictionary definition of “one that cannot act effectively because of a disablement or other cause” and, symbolically, as a journey of the soul.

Steve, the main character, starts the novel filled with self doubt. Through a journey of discovery and growth he changes into an able confident young man. Having lost his mother under mysterious circumstances Steve is trying to fit in while accepting the loss, yet he continues to believe he will find her. Will he be able to find her? Can he bring her back? His wacky Aunt Shannon thinks so. Steve doesn’t believe her.

The addition of alchemy to the story creates a new level of interest. Transformations are not limited to changing one object into another, along the old lead to gold theory line, but, include the movement of the alchemist through space. Steve learns that his mother, along with his aunt are both alchemists, and that perhaps alchemy is responsible for his mother’s disappearance. Aunt Shannon teaches Steve that alchemy is performed through the appropriate use of language and a benu stone. Bill Bunn emphasizes the value of words to change ourselves and the world around us, and gives the reader a clue as to how Steve will change his situation.

You can change a thing with words much easier than you can with fire. I can bend words so many ways, break them, and put them back together again. And when you change a word in just the right way, you change the world.” Aunt Shannon paused (51).

Bill Bunn’s use of language in Duck Boy is superb with remarkably fresh images starting in the prologue and continuing throughout the novel. Images like, “[a] brown pond of coffee on the floor … surrounded by the shark-fin shards of a shattered mug” (2), a part of the scene when Steve discovers his mother has disappeared. Then later when he thinks he sees his mother at the mall, and she starts off “slaloming through the food court tables” (7) while Steve’s progress to catch her is thwarted by a crowd that sprouts up. Steve is awoken from this daymare by “[a] badly dressed frown with legs” (8), his teacher Mr. Pollock. Further on while Christmas shopping with his Great Aunt Shannon, Steve mentally voices the depressing thought, “I’m going to the mall with a cartoon” (64). The wacky aunt character made me laugh.

Symbolism abounds throughout the novel with such instances as Aunt Shannon’s white “1966 Dodge Monaco convertible” (64) being referred to as “the dragon rumbled to life” (65) when it started. Later in the story Steve has to master the dragon — drive the car — to return to Aunt Shannon’s house after she goes missing in the same manner as his mother went missing.

At first Steve doesn’t believe his aunt can change one object into another, until he sees her do it, and then has success causing a transformation himself with the aid of his aunt and her benu stone. Once Steve finds his benu stone and starts to experiment, he discovers that perhaps he shouldn’t short change his own abilities. The choice of benu, as the name of the stone that allows for transformations, brings in more symbolism: the Benu Bird (also known as the Phoenix) whose meaning in alchemy refers to a rebirth from its own ashes after combusting voluntarily. By the end of the story we see a new Steve, one who could be said to have returned from his own ashes.
At the end of the novel Steve proudly refers to himself as Duck Boy with the proclamation that he is master of the world of pieces. “You are my world now…You will listen to me. I am a whole one: I am the Duck Boy” (281).

I expect I will come back to Duck Boy for an additional read in the future. In the past ten years a number of novels written for a younger audience have crossed over to the adult market, I think Duck Boy by Bill Bunn has the potential of making that crossover.